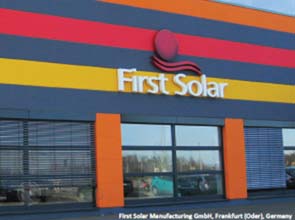 The plant, which makes First Solar’s trademark thin-film solar modules, is located in Frankfurt in the state of Brandenburg. The plant’s yearly capacity will rise from 223 megawatts to about 446 MW by the fourth quarter of 2011 after the expansion is completed.

The investment of the American solar manufacturer marks the first major foreign direct investment in the German green renewables sector this year.

“The commitment of First Solar is good news for the state Brandenburg and the city of Frankfurt. Companies that are willing to invest in times of economic crises ensure a bright future [for] the state. This will create sustainable jobs,” said Matthias Platzeck, Brandenburg minister president.

The plant’s 600 employees at present are expected to double after the expansion.

First Solar president Bruce Sohn said the development reflects their tight partnership with the local government. The company is in advanced negotiations with German regional and federal authorities to secure permits and financial support for its expansion plan.

“This announcement confirms our belief in and continuing commitment to the growth of the German and European markets for clean, affordable solar electricity,” said Mr. Sohn.

Ralf Christoffers, Brandenburg minister for economic affairs, said First Solar’s stronger foothold in Frankfurt will beef up one of the most innovative and fastest growing sectors in the German state. He said solar companies have recently mushroomed there and gave First Solar credit in leading in this trend.

First Solar Inc. is one of the world’s leading makers of thin-film photovoltaic modules and expects to produce over 1.3 gigawatts’ worth of solar modules in Germany, the United States and Malaysia this year. The company employs over 4,700 people worldwide.