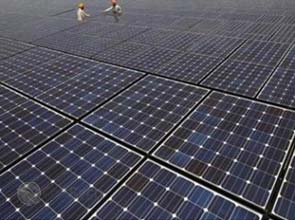 The new reality is forcing solar specialists, mostly Taiwanese, which have long had a simple business model that generated steady revenues and modest margins, to form partnerships and diversify at a faster pace to stay in the business.

"Unless they add scale quickly enough to slash costs, stand-alone producers will have a hard time competing against bigger integrated players on price," said Min Li, head of alternative energy at Yuanta Securities.

These companies will face a tougher market in the next three to five years as big Chinese solar firms continue expanding despite slowing demand, Li said.

Specialists such as Sino-American Silicon Products and Solargiga Energy Holdings believe they could fend off competition with joint ventures that will help them expand across the supply chain, while keeping their lead in the wafer business.

"Demand and supply are always unbalanced, no matter, in high or low season, we can always help each other," said Sino-American President Doris Hsu, referring to its partner Solartech, a solar cell maker.

"It's good from a price competitiveness view point, and it's also good for companies to cope with high and low seasons."

Incentive cuts and competition from bigger rivals have also hurt the specialists' shares.

Shares in Motech Industries, Taiwan's largest solar cell company and the world's No. 5, nearest rival Gintech Energy Corp and Sino-American have slipped by a fifth from their highs this year after Italy announced solar-incentive cuts.

Total sales at the top five Taiwanese specialists declined 15 percent in May from April, when they fell 36 percent.

Analysts expect several of these companies to suffer a profit fall of up to 80 percent in 2011, a sharp contrast from a profitable 2010 when a surge in demand from Germany boosted sales.

The sector has seen a spate of joint ventures and partnerships recently as companies join hands to fight competition.

On March 12, Sino-American sold a 5 percent stake to Solartech in exchange for 10 percent of Solartech.

The same week, Motech said it was creating a joint venture with Green Energy Technology and Taiwan Polysilicon Corp to make wafers.

Too little, too late

While specialists are attempting integration, partnerships and diversification, the move could prove to be too little and too late as the cash-rich Chinese rivals have already got a headstart at expansion.

Companies such as Taiwanese cell makers Neo Solar Power and Tainergy Tech Co could find it tough as they have stayed clear of joint ventures so far, analysts say.

As entry barriers are low for wafer and cell projects, the industry is prone to over-investment, fuelling a boom-bust cycle that makes company margins volatile, they said.

The biggest threat could be from integrated Chinese solar players such as GCL-Poly Energy Holdings, which until a year ago was supplying only polysilicon, a raw material for solar wafers, analysts said.

By the end of last year, GCL became the world's largest supplier of wafers, according to data from Piper Jaffray Research, overtaking MEMC and Sino-American.

GCL is spending $2.28 billion to boost production, while its peer Chinese firm LDK Solar will increase wafer production by a third by the end of next year.

While Suntech and other Chinese module firms do not compete head on with specialists in the supply of wafers and cells, their focus on trimming module prices to win markets could hurt high-cost solar module companies that buy directly from specialists.

"Motech is at a strategic disadvantage as it places its cells in the market through high-cost module makers in the E.U. and Japan," said analysts at HSBC in a report.

"Most high-cost players will come under increasing pressure amid oversupply. Some of the pressure is likely to reflect in lower margins across the supply chain, i.e., on cell makers like Motech."