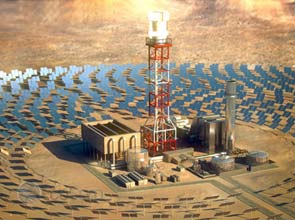 The California-based company is currently using a concentrating solar power plant design that focuses sunlight on water, creating steam for running a generator.

In BrightSource’s new design, called the “SolarPLUS” energy storage system, some of the steam generated is diverted to a heat exchanger to heat molten salt, a mixture of sodium and potassium nitrate.

Power plant operators can use the hot molten salt, which traps heat better compared with water, to produce steam and generate electricity after dark, just when electricity demand spikes.

Molten salt systems have in fact been developed primarily for utilities to smooth out the variations of renewable electricity, since renewable sources’ electrical output especially from solar and wind change throughout the day.

Researchers from the lab said potassium nitrate and sodium nitrate are cheap, plentiful and lasts longer compared with electrical batteries, usually used to store power from solar PV panels, which degrade relatively quickly with use.

However, special materials are required to avoid salt corrosion in molten salt systems, which could mean more construction and maintenance costs. In addition, salt has a higher freezing point than other heat transfer fluids, which means that pipes must be kept warm to keep the salt molten.

In addition, since salts can only retain heat for up to 10 hours according to the United States Department of Energy, it is unlikely that heat stored from summer sunlight can be used to generate electricity in the winter.

But according to Solar Power and Chemical Energy Systems, a think-tank on concentrating solar power managed by the International Energy Agency, molten salt offers a number of advantages over oil used in rival parabolic trough solar power plants.

Molten salt can operate at higher temperatures than oils used as a heat transfer medium– above 500 degree Celsius instead of around 400 degrees Celsius – therefore increasing efficiency and power output of a plant.

BrightSource power plants use thousands of mirrors called heliostats that track the sun to constantly focus sunlight on a boiler on top of a tower.

BrightSource’s 392-MW Ivanpah project being built in the Mojave Desert has been called the world’s largest concentrating solar plant but currently does not have a molten salt storage system.