In depth: Large hydropower has effects on rain, climate change 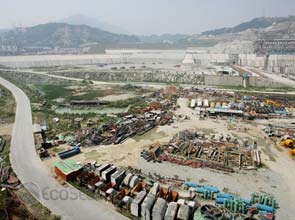 However, many scientists, research institutions and climate advocates keep saying that hydropower is not all that - for all the benefits it gives, it takes back in terms of environmental effects.

The traditional concept of large hydropower, one which entails the building of dams and levees, is ridden with issues.

First, they are said to influence local rainfalls as, because of the large areas they occupy, they reduce evaporation when they drain wetlands and open up woodlands.

An example of this is the Niger Delta in West Africa. According to Christopher Taylor of the Centre for Ecology and Hydrology, existing and proposed dams on the Niger would reduce the river's flow by almost half.

At the site of the Three Gorges Dam in China, locals have also complained that droughts have become more frequent and severe since the project's completion in the Yangtze River in 2003. This May, the dams operators released extra water from the dam, supposedly to contribute to drought relief.

Scientists also found out that dams can influence storm patterns too. Faisal Hossain and Roger Pielke Sr. found the possibility of storm intensification in impounded basins of the Mediterranean and arid climates of the United States.

On the whole, researchers have been saying that dams and reservoirs actually contribute to climate change. How so? Plankton and plants that live in the reservoir, the detritus washed down from the watershed, and the seasonal flooding of plants along reservoir fringes - all of these release methane and carbon dioxide, because of which emissions are guaranteed to continue for reservoir's lifetime.

Ivan Lima of Brazil's National Institute for Space Research estimated the total methane emissions from large dams at 104 million tons per year, which is around 4 percent of human-made climate change and equal only to the contribution of the civil aviation industry.

The latest dam controversy is that of the Belo Monte dam project in Brazil, whose construction is expected to cost $16 billion and whose transmission lines will cost an additional $2.5 billion, for a whopping $18.5 billion total.

Contentions are magnified by reports like that released by the World Wide Fund for Nature-Brazil in 2007. It turns out, according to them, that Brazil could cut its expected demand for electricity by 40 percent by 2020 by investing in energy efficiency instead of hydropower, saying the power saved would be equivalent to 14 Belo Monte hydroelectric plants and would result in national electricity savings of up to $19 billion.

An expert in Chinese environmental and water issues, Dr. Richard Hardiman, said that undeniably, large and to some extent small hydropower post some problems.

Aside from the dams' effects on rainfall and the climate, Mr. Hardiman said dams can cause localized or man-made earthquakes when extra water pressure created in the cracks and fissures near dams increases. This lubricates faults that cause the shaking of the ground, destroying fertile land.

Mr. Hardiman, who holds a Ph.D. in environmental and agricultural sciences from the Hebrew University of Jerusalem, said dams and reservoirs "choke up rivers" and reduce downstream flow.

"Let's say that the bodies of water are like blood flowing inside your body. A dam is like an obstruction inside your circulatory system that is blocking the flow of blood inside you," he told EcoSeed.

Mr. Hardiman said a dam does present an obstacle to migrating fish. "Some fish go upstream for breathing, some downstream for eating, and vice versa. When a dam blocks their way, that could be a problem for them, and that would affect ecology in communities."

He commends the European Union water framework directive that requires new power plant constructions to minimize environmental and ecological impacts of the hydropower plant which include setting up of fish ladders so that fish can climb up dams and be able to migrate. These "fishways" enable fish to pass around the barriers by swimming and leaping up a series of relatively low steps into the waters on the other side.

"It would be better to build smaller dams, but then again a cascade of smaller dams in a single area is not very attractive to look at," Mr. Hardiman said.

In essence, Mr. Hardiman is saying that no energy resource is perfect in form. "Coal, gas, and oil all have their problems - a better alternative to them would be hydropower. But then one would say let us turn to wind and solar power instead of focusing on hydro.

"Basically every energy generation module has its pros and cons. What's important is to look at every single option available and blend in other systems in order to achieve the ultimate goal of producing energy," Mr. Hardiman said.