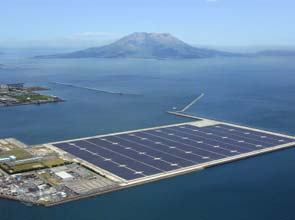 A new company, the Kagoshima Mega Solar Power Corporation, was established by these investors to facilitate the construction of the plant in Kagoshima City. The company will also continue to operate the plant and will sell the power generated to a local utility under Japan’s feed-in-tariff program.

The Kyocera Group is the largest shareholder in the new company and was responsible for supplying the 290,000 solar panels used in the project. Kyocera will also be in charge of the maintenance of the system.

Aside from providing clean and renewable energy, the Kagoshima solar project will also provide an opportunity for educating the public about solar energy.

A tour facility has been built adjacent to the solar power plant with a circular viewing room from which visitors can observe the operations from an elevated vantage point. Display zones around the facility will provide information about environmental issues and the science behind photovoltaic energy generation.

With this facility, all parties involved hope to foster a deeper understanding of renewable energy and further facilitate Japan’s growth into a low-carbon society.

The Japanese government has been actively encouraging the development of their renewable energy capacity with the launch of a restructured FIT program in July 2012.

To encourage the development of solar power projects, the FIT program stipulates that local utilities are required to purchase 100 percent of the power generated from solar installations of more than 10 kilowatts for a period of 20 years.

The FIT program, which offers some of the worlds most favorable rates for solar, will help drive the Japanese photovoltaic sector in the years to come. According to IMS Research, the country is looking at adding over 5 gigawatts of solar capacity this year alone (see related story), spurring it to become among the world’s largest solar markets. – EcoSeed Staff