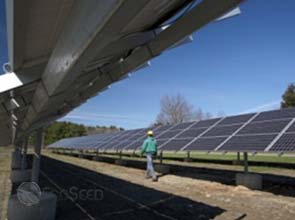 The project is located in the San Carlos Ecozone in San Carlos City, Negros Occidental. The SaCaSol project is being developed in two phases: Phase 1 with 13 MW and Phase 2 with 9 MW.

It was Phase 1 which was officially opened last Thursday. The completion of this phase involved approximately $46 million worth of investment. The construction of Phase 2 is now set to commence, with commercial operations set for June of this year.

SaCaSol Chairman Jose Maria Zabaleta, in an interview with local daily The Manila Times, said that the success of the SaCaSol project has opened the door for the development of more solar power plants in the region.

In the interview, Mr. Zableta said that the company is already gearing up for the development of four additional solar power plants in San Carlos, to be operational by the summer of 2015.

The province of Negros is considered to be one of the best locations in the Philippines for solar farms. The area is said to have enough daily solar irradiance to generate an average of 5.0-5.5 kilowatt hours of power a day. – EcoSeed Staff