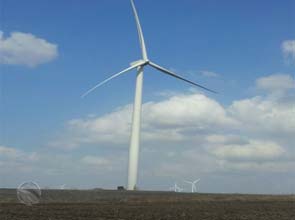 D.E.S.R.I. announced that, as of January 9, ground has been broken at the site of the Red Horse 2 wind and solar project in Cochise County Arizona.

D.E.S.R.I. announced that, as of January 9, ground has been broken at the site of the Red Horse 2 wind and solar project in Cochise County Arizona.

D.E.S.R.I. is a member of the D.E. Shaw group, a global investment and technology development firm. D.E.S.R.I. and its affiliates acquire long-term contracted renewable energy assets in North America.

For the Red Horse 2 wind and solar project, D.E.S.R.I. is working with Torch Renewable Energy a developer of renewable energy projects in the Southwestern United States.

T.R.E. began developing the 71-megawatt Red Horse 2 project in 2011. D.E.S.R.I. provided development funding to the project starting December 2013 and acquired the project in August 2014 with senior debt from Santander Bank, N.A. and Banco de Sabadell, S.A., alongside a commitment for tax equity financing from U.S. Bank.

The Red Horse 2 will use Vestas wind turbines with Jinko Solar panels and Advanced Energy inverters to produce power. Swinerton Renewable Energy will design and construct the project and also provide ongoing operations and maintenance services when the project is operational.

The project has a 20-year power purchase agreement with Tucson Electric Power and it is expected to power more than 13,500 homes.

Apex began developing the Balko in 2009. As of late 2014 they sold the project to and affiliate of D.E.S.R.I. Financing for the acquisition was provided by by Santander Bank, N.A., KeyBank, N.A., Citi, and Banco de Sabadell, S.A. Commitments for tax equity financing were provided by affiliates of Bank of America Merrill Lynch, General Electric Capital Corp., Google Inc., and Citi. CohnReznick Capital Markets Securities, LLC acted as advisor to D.E.S.R.I. for the tax equity financing. Financial terms were not disclosed.

D.E.S.R.I. will oversee the completion of the project and manage it once operational. Balko wind is expected to be operational by the late summer of 2015.

Balko Wind will consist of 162 G.E. wind turbines and will have a total generation capacity of 300 MW. The project will be able to produce enough power for about 111,000 homes.

Power purchase agreements for Balko Wind have been signed with the Public Service Company of Oklahoma and Western Farmers Electric Cooperative. – EcoSeed Staff