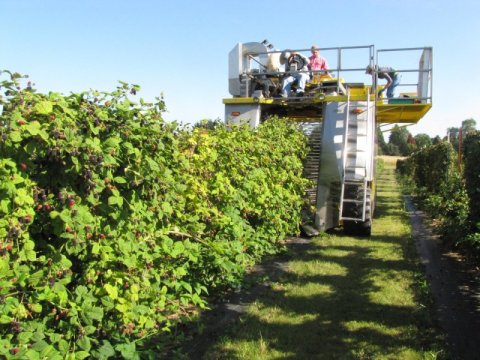 Javier Fernandez-Salvador and Bernadine Strik from the Department of Horticulture at Oregon State University, and David Bryla from the U.S.

Managing soil nutrients in organic production systems presents multiple challenges for fruit growers. The availability and release rate of nitrogen from organic fertilizers, ease of application, and cost are among the important factors that influence choices in organic production. The authors of a new study say that there has been limited information available about the influence of fertilizer sources of nitrogen that can be injected and fertigated on fruit yield and quality in organic blackberry. Their study revealed two organic fertilizers that the scientists say are «good options» for these crops.

Javier Fernandez-Salvador and Bernadine Strik from the Department of Horticulture at Oregon State University, and David Bryla from the U.S. Department of Agriculture, Agricultural Research Service, published the results of their research in the February 2015 issue of HortScience. The study was designed to determine the impact of two organically approved liquid fertilizer sources applied through fertigation on plant growth, yield, fruit quality, and soil and plant tissue nutrient status of ‘Marion’ and ‘Black Diamond’ blackberry grown in an organic production system. The study also assessed the impact of fertilizer source on performance of the drip irrigation/fertigation system.

‘Marion’ and ‘Black Diamond’ blackberries were chosen because the varieties are harvested predominately by machine for high-value processed markets, and together account for greater than 75% of the blackberries produced in Oregon. The researchers established the planting in Spring 2010 at the North Willamette Research and Extension Center in Aurora, Oregon, using approved practices for organic production; the planting was certified organic in 2012. The research was conducted from 2011-13. Two sources of liquid fertilizer were evaluated in the study: a corn steep liquor/fish waste digestion blend, and a fish solubles/molasses blend. Both fertilizers were applied by fertigation through the drip system at rates of 56 kg·ha-1 nitrogen per year in 2011-12 and 90 kg·ha-1 nitrogen in 2013. The scientists also evaluated the impact of fertigation on drip system performance with two maintenance options: «flushing» and «no flushing» of driplines.

«Using the current standards for blackberry, the liquid corn and fish organic fertilizers applied, although differing in macro- and micronutrient content, supplied sufficient nutrients to meet plant needs with the exception of calcium and boron,» said corresponding author Bernadine Strik. «As expected, ‘Black Diamond’ had greater total yield and average fruit weight than ‘Marion’. Overall, there were no differences between the fertilizers on plant growth, yield, or fruit quality, and both fertilizers were suitable for planting establishment.»

Results also showed that both fertilizers could be applied through the drip, but emitter performance was reduced over time. The authors said that flushing of the fertigation system should be conducted on a regular basis to reduce the possibility of residue accumulation at the end of the lines and to prevent emitter clogging over time. They also recommended further research to determine the cause of the reduction in emitter flow performance and the relation to organic fertilizers and possible causes for clogging.