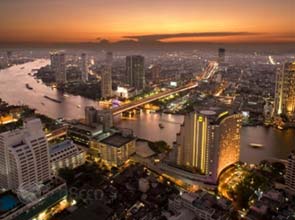 The deal in Bangkok came after nearly four days of talks that some developing nations said were needed to «recalibrate» United Nations climate negotiations after last year’s Cancun agreements.

They wanted an agenda that tackled the fate of the Kyoto Protocol on fighting global warming and rich countries’ pledges to cut emissions, and clarified sources of cash for poorer nations rather than just building on what was agreed at Cancun.

But many rich nations said some developing nations were simply trying to row back on what was agreed in Cancun and this undermined negotiations this year that culminate in the South African city of Durban from late November.

Many nations were unhappy that much of the April 3-8 meeting was taken up arguing over the agenda, with the United States saying the delay dampened the mood, while some developing nations had misgivings about the end result. All expressed an urgency to press ahead with negotiations.

«It’s less rosy today than when we came in (at the start of the meeting),» senior United States negotiator Jonathan Pershing told reporters. In particular, he said some countries wanted to renegotiate the Cancun decisions.

«I don’t think that’s going to be constructive. What became evident is that we can expect more of that going forward,» he said.

Tosi Mpanu Mpanu, chair of the Africa Group, said he had mixed feelings. «Thank god we came up with an agenda. It’s a pity it took so long. What does it say for the rest of the year?»

Cancun is widely regarded as saving the often fraught negotiations from collapse.

Nations agreed curbs on the loss of tropical forests, schemes to transfer clean technology to poorer nations and help them adapt to climate change impacts, and a goal for rich countries to provide $100 billion a year in aid from 2020.

But it side-stepped tougher issues, such as whether to extend or replace the Kyoto Protocol, with concerns growing that a new pact or extension to Kyoto will not be agreed before the pact’s first phase ends next year.

Kyoto binds almost 40 industrialized nations to cut greenhouse gas emissions by an average of 5.2 percent below 1990 levels during the five-year period 2008-2012. A second phase is meant to increase those cuts for rich nations.

It is the only pact imposing legal obligations on emissions cuts and the United Nations talks have been hobbled by disagreement over how to extend that obligation to all major economies, such as China, the world’s top greenhouse gas emitter.

The United States is No. 2. It never ratified Kyoto.

In Bangkok, there was a fresh focus on trying to find a compromise, with the agreed agenda stating there should be a continued discussion of the legal options of a new agreement that captures emissions curbs by all major economies.

«This evening in Bangkok, parties agreed an agenda to work toward a comprehensive and balanced outcome at the U.N. Climate Change Conference in Durban,» said United Nations climate chief Christiana Figueres.

But disputes still loom over the size of rich nations’ pledges to cut emissions, with the United Nations saying they are not enough to avoid average global warming of less than 2 degrees Celsius.

Nations agreed in Cancun to work to keep the rise below this level to stave off ever greater extremes of droughts and floods, crop failures and rising sea levels.

Environmental groups were worried by the outcome of Bangkok.

«Once again, delegates could not reach agreement over key issues, including the future of the Kyoto Protocol, bringing the talks to a screeching halt almost from the beginning,» said Tasneem Essop of WWF.

Others pointed to the urgency to act to fight the impacts of climate change.

«There’s uncertainty about where the Cancun agreements take us, and can countries meet their commitments, and is it enough? And I think that was really at the heart of the agenda debate,» said Angela Anderson of the United States Climate Action Network.