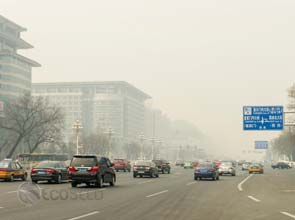 Governments of six regions in China, along with the Ministry of Environmental Protection, have signed an agreement to control and prevent air pollution.

The six regions that have signed the agreement are all located in the northern part of China, namely Beijing, municipality of Tianjin, provinces of Hebei, Shanxi, and Shandong, as well as the Inner Mongolia Autonomous Region – regions that are suffering from heavy air pollution.

The agreement was signed at a meeting regarding the prevention and control of air pollution which was attended by Chinese Vice Premier Zhang Goali, where he called for resolute and steady efforts to combat air pollution in heavily-polluted areas surrounding the country’s capital.

“Cities that are heavily polluted should be key targets, with strengthened supervision on various pollution sources and efforts to cut them down,” said Mr. Zhang.

The vice premier noted that air pollution can be controlled and prevented by using less coal, and by pushing for clean energy as substitutes, emissions reduction for automobiles, and the promotion of public transportation and environment-friendly industrial technology.

Mr. Zhang also urged the local governments to set strict goals and to shoulder responsibilities for the quality of air within their jurisdiction.

Beijing has been in the center of the issue regarding air pollution for some time now. Earlier this month, Beijing Municipal Environmental Protection Bureau revealed that vehicle emissions in the city are contributing to the worsening air pollution, with over 5 million vehicles discharging 900,000 tons of emissions annually (see related story).

According to data released by the Environmental Protection Ministry just this week, because of the problem of air pollution in the country, only 24 of the total 74 cities reported having good air quality for majority of the month of August (see related story). – EcoSeed Staff