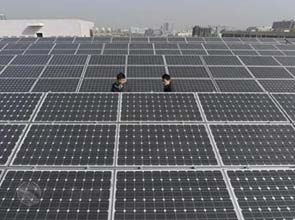 All but five percent of the worlds energy needs could be met from renewable sources by 2050, a report by conservation group World Wide Fund for Nature and energy consultancy Ecofys showed on Thursday.

In 2050, total energy demand could be 15 percent lower than in 2005 due to ambitious energy saving measures even though population, industrial output, freight and travel will increase, the report said.

Currently, more than 80 percent of global energy comes from fossil fuels but the report said nuclear power, fossil fuels and biomass could be almost entirely phased out by 2050.

To achieve this, building heating needs to be cut by at least 60 percent through energy efficiency, the use of solar power and geothermal heat.

«Renewable energy and better grid interconnection with Europe has the potential to meet all of our energy needs in a very sustainable way,» said Nick Molho, head of energy policy at W.W.F.-U.K.

Financial incentives for renewable energy generation, such as feed-in tariffs, would play an important role.

Consumption of meat should be halved per person by 2050 in industrialized countries and increased by a quarter elsewhere, the report said.

The population should also cycle, walk, use more public transport and replace air travel with trains.

By 2050, 4 trillion euros ($5,588 billion) will be saved annually through energy efficiency and reduced fuel costs in a business-as-usual scenario, the report said.

This will grow over the next 25 years to about 3.5 trillion euros a year from 1 trillion euros. The investments would start to pay off in around 2040 when the savings start to outweigh the costs, the report said.

Europe will need to spend 2.9 trillion euros or 25 percent of the bloc’s annual gross domestic product over the next 10 years to satisfy demand for low-carbon technologies, a separate report by Accenture and Barclays Capital said this week.