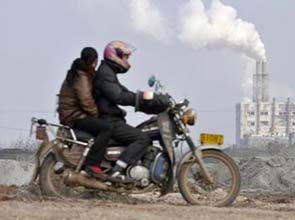 «We’re still a developing country – the standard of living is still not high, employment trends are serious and each level of government is paying attention to economic growth,» he said.

China’s consumption of coal – the dirtiest of fossil fuels and a major source of acid rain, water pollution and climate change – rose around 1 billion tons in the five years from 2006, and could rise another billion in the next five, he said.

«In this kind of territory, if we add emissions from another 1 billion tons of coal, how big will the impact be on our environment?» Mr. Zhang told reporters.

China plans to cut its levels of carbon intensity – the amount of carbon dioxide produced per unit of G.D.P. – by 17 percent by the end of 2015. Mr. Zhang said individual regions had already been set targets.

China’s climate change measures have normally been the responsibility of the growth-focused National Development and Reform Commission, with the environment ministry taking on more immediate threats such as acid rain-inducing sulfur dioxide and nitrogen oxides, as well as water and soil contamination.

But environment minister Zhou Shengxian said last month the ministry would include carbon dioxide emissions in the environmental impact assessments of major projects.

Mr. Zhang said the ministry would only approve individual projects that fit in with regional greenhouse gas targets, and the N.D.R.C. would still play the leading role in China’s climate change efforts.

The ministry was upgraded from a lower-level «bureau» just three years ago, and fears remain that China will continue to give priority to economic growth, especially in poorer regions.

The ministry has not been involved in climate change discussions, and environmental activists say it has been frozen out of policy debates about the development of hydropower – seen as a key part of China’s «low-carbon» strategy over the next decade.

Mr. Zhang said it would be «very easy» to sacrifice the economy for the environment, but the crucial issue for local governments was greener growth, and China already had systems to ensure regions meet their duty to both create jobs and protect health.

China aims to keep annual growth at around 7 percent in the next five years, but Zhao Hualin, head of the ministry’s pollution control office, told reporters the G.D.P. target was only for «guidance» and would not supersede environmental goals.

China will publish its detailed «five-year plan» for the environment after it has been approved by the State Council, the country’s cabinet. It has already announced that sulfur dioxide and chemical oxygen demand will be cut by a further 8 percent in the next five years, and nitrogen oxide and ammonium nitrate will also be cut by 8 to 10 percent.

Responding to the closure of three nuclear power plants in Japan following the country’s biggest ever earthquake on Friday, Mr. Zhang said Beijing would keep a close eye on the situation.

«We have already begun monitoring coastal cities to test whether Japan’s nuclear leaks will affect China but up to now everything is normal.»