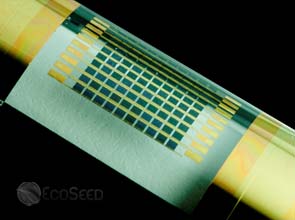 Researchers from the University of Illinois are developing less costly gallium arsenide thin-film solar cells by “growing” multiple layers of the material on a single wafer. Gallium arsenide is a compound semiconductor that has the potential to create solar cells with higher energy conversion efficiency than conventional silicon solar cells.

They have recorded efficiency between 25 percent and 30 percent. However, the greatest barrier to their widespread use is high manufacturing cost.

John Rogers, professor of materials science, engineering and chemistry, and fellow professor Xiuling Li are exploring cheaper ways of producing thin films of gallium arsenide, at the same time make them versatile enough to be incorporated in other types of devices.

“By doing this we can generate much more material more rapidly and more cost effectively,” said Mr. Rogers. “We’re creating bulk quantities of material, as opposed to just the thin single-layer manner in which it is typically grown.”

“If you grow 10 layers in one growth, you only have to load the wafer one time,” said Mr. Li, a professor of electrical and computer engineering. “If you do this in 10 growths, loading and unloading with temperature ramp-up and ramp-down take a lot of time. If you consider what is required for each growth – the machine, the preparation, the time, the people – the overhead saving our approach offers is a significant cost reduction.”

In a paper published online in the journal Nature, the researchers demonstrated three types of devices for which gallium arsenide chips manufactured in multilayer stacks could be used. These are light sensors, high-speed transistors and solar cells. The authors also provided a detailed cost comparison with other materials.

Among the paper’s co-authors are two scientists from Semprius Inc., a North Carolina-based startup beginning to use the technique to manufacture solar cells.

The Illinois researchers were funded by the Department of Energy and the National Science Foundation.