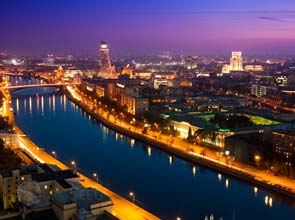 Siemens entered into a strategic partnership with two Russian companies to establish a joint venture that will put the German engineering conglomerate in the forefront of Russia’s wind energy industry.

The joint venture between Siemens, Rostechnologii and RusHydro will set up production facilities for wind turbine components, as well as be in charge of the sales and services of wind turbines in Russia and other countries.

Siemens will also put up three more wind turbine component factories in the United States and China this year, while manufacturing facilities in India and Britain are also planned.

“In the coming five years we intend to install wind turbines with a total capacity of 250 MW to 500 MW per year,” said René Umlauft, chief executive of Siemens’ renewable energy division.
Siemens (FWB:
SIE
, NYSE:
SI
), who will retain a majority stake in the joint venture, plans to install at least 1,250 MW of capacity in Russia by 2015, which will help the country achieve its targeted 5,000 MW of installed wind capacity by 2020.

In 2008, the Russian government set a target of 4.5 percent, or 22 gigawatts, renewable energy usage by 2020. If the country achieves this goal, Russia would have installed 7 GW of wind capacity, the Russian Wind Energy Association predicted.

Because Russia is situated in different climactic zones, the country boasts of vast wind energy potential, providing roughly 32.6 terrawatt-hours to 71.7 TWh annually. This is mostly concentrated along seacoasts, in the vast territories of steppes, and in the mountains.

The northern and eastern regions of Russia are also believed to be among the regions with the most favorable conditions for wind energy generation.

The European Bank for Reconstruction and Development’s renewable energy initiative even estimated that exploiting just 25 percent of Russia’s total wind potential will produce about 175,000 MW of power.

While there is more than 1,700 MW of wind projects under development and another 3,000 MW to 3,500 MW in the pipeline, this is apparently not enough to sustain the country’s energy use.

“Russia is not yet showing significant signs of growth in wind energy. Its installed capacity hasn’t increased over the past few years and remains at 11 MW, which considering the size of the country, is practically insignificant,” said Chistian Kjær, executive director of the European Wind Energy Association.

The lack of legislative mandates such as renewable portfolio standard or feed-in tariffs can be a hindrance to the progress of renewable energy development in the country.

According to Anatoli Kopylov, vice president of the Russian Wind Energy Association, the current legislation does not provide any financial incentives to improve renewable generation capacity in the country, and there are still no subsidized connection costs for projects smaller than 25 MW.