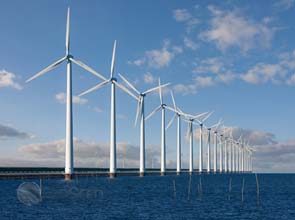 ABB Limited will build a $700 million power transmission project off Germany’s northern shores to connect the DolWin1 cluster of offshore wind farms to the mainland, marking the largest such order the engineering conglomerate has acquired in the country.

The order comes from Transpower, one of Germany’s four transmission grid operators. The project will be crucial in transmitting 800 megawatts of direct current electricity from the 400-MW Borkum West II wind farm and other nearby wind energy projects in the DolWin1 grouping.

Power from the wind farms will be transmitted to an onshore station at the municipality of Dörpen through 165-kilometers of underwater and underground cables. The Dörpen converter station, situated on Germany’s northwest coast, will feed the alternating current power to Germany’s mainland grid.
This project is the second high-voltage direct current project of ABB (NYSE:
ABB
) which uses smaller components compared with other similar systems. ABB previously took on transmission work for another cluster, the BorWin1 project which is the world’s remotest offshore wind farm.

Located about 45 kilometers north of the East Frisian Islands in the North Sea, the 1.159 million euro ($1.47 million) Borkum West II wind project is the first large-scale offshore wind in the Germany Exclusive Economic Zone. Around 58 offshore wind parks using more than 4,500 wind turbine generators are planned in this area, which will have an estimated annual production capacity of 1,300 gigawatt hours.

The DolWin1 cluster, to which Borkum West II belongs, joins three other clusters in the German North Sea – BorWin1, SylWin and HelWin1.

Germany presently sources 8 percent of its electricity demands from wind power. This is expected to double by 2020.