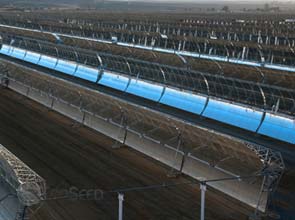 The 60 million euro ($77.49 million) plant can collect and store sunlight to generate electricity at night or overcast conditions, overcoming a common limitation of solar energy generation. The plant can reduce carbon dioxide emissions by about 3,250 metric tons, representing annual savings of 2,100 metric tons of oil equivalent.

Solar thermal plants capture solar energy in the form of heat, concentrating it in an area where it heats liquid – usually synthetic oils – flowing through tubes. The hot fluid is then used to power a steam turbine generator.

The Archimede plant is the first concentrating solar power plant to use molten salts as a heat transfer fluid instead of the traditional diathermic oil, while integrating a combined-cycle gas facility for electricity generation.

Molten salt, a mixture of sodium nitrates and potassium, possesses a heat capacity able to drive its temperature up to over 1,000oF.

The project uses 54 parabolic mirrors, covering 30,000 square meters, to concentrate sunlight onto 5,400 meters of pipe that carry the molten salt. It also features a steam generator and two heat storage tanks – one hot and one cold.

When the sun shines, thermal fluid from the cold tank is circulated through the network of parabolic collectors, where it is heated to a temperature of 550oC. The fluid is then injected into the hot tank where the thermal energy is stored.

The hot tank is the key to the system’s ability to generate electricity any time of the day. There, the thermal fluid is kept hot to produce steam at high pressure and temperature to power the steam generator.