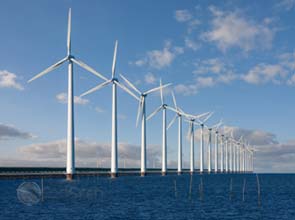 Latest data from the United States’ prime renewable energy research laboratory show that the country’s most resource-rich regions for offshore wind can produce an astounding 4.150 terawatts of capacity.

A terawatt represents 1,000 gigawatts, over half of which can give electricity to hundreds of thousands of households.

It focused its study on areas located 50 nautical miles offshore and have wind speeds of approximately 7 meters per second at an altitude of 90 meters. The laboratory used geographic information system techniques to determine water depth and distance from the shore.

The lab then assumed a scenario where 5-megawatt wind turbines will be placed in every square kilometer of the resource-rich areas.

Based on the laboratory’s calculations, Hawaii has the most robust winds among all the states studied. Results reveal that the islands hold over 637 GW of potential wind generating capacity, roughly the equivalent of the power consumed by 200,000 American homes.

California has the second largest potential at 587 GW, followed by Michigan with 483 GW and Louisiana with 315 GW.

Indiana and New Hampshire are at the end of the list, but they still promised potential generating capacities of 2.9 GW and 3.4 GW respectively, which are approximately the size of six fairly large coal plants that operate at 500 MW of capacity each.

Overall, the 26 states can generate a total of 4,150.3 GW of wind energy. This effectively surpasses the country’s total electricity generating capacity in 2008, which was 1,010 GW.

The findings support those of another study made by the Energy Department which argues that the United States can source 20 percent of its entire energy needs from the wind by 2030. In such a scenario, 46 states could go through considerable wind power development.

Industry projections show that the wind industry could support the creation of 500,000 local jobs, of which 150,000 would be direct employment.

A 20 percent wind scenario could also raise annual property tax revenues to over $1.5 billion by 2030.