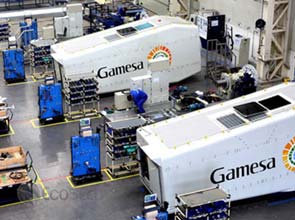 Spain-based wind turbine manufacturing giant Gamesa will ship out 251 megawatts’ worth of turbine units to China after securing supply contracts from three Chinese power companies, one of them a new customer.

But the largest order according to number of units is from new customer Henan Weite Wind Power. Gamesa will supply 124 units of its G58-850 kW turbine to the company.

The wind turbines will support the independent power producer’s 105.4-MW Henan Weite Wind Power Project, which is expected to have annual output of 200 million kilowatt-hours. The project is supported by the China Climate Change framework loan from the European Investment Bank.

These new contracts come a month after Gamesa announced the signing of strategic agreements which will allow it to supply China with 1,315 MW of turbine capacity between 2010 and 2013.

Forecasts project China’s growth into a major wind power market in the future, having already established itself as the fastest-growing wind energy market in the world by doubling its wind generation capacity annually.

For its part, Gamesa expects sales in China to increase by an annual average of 20 percent between 2009 and 2013. It also plans to double its production capacity in the country to over 1,000 MW in 2013.

“The company’s goals include cementing its position as one of the top five players in the Chinese wind energy industry”, said Jorge Calvet, chairman of Gamesa.

“This requires keeping up with the pace of growth in the industry and with the needs of its customers, as a manufacturer of wind turbines, a provider of maintenance services and a wind farm developer in conjunction with local partners in regions of China with the greatest wind potential,» he added.