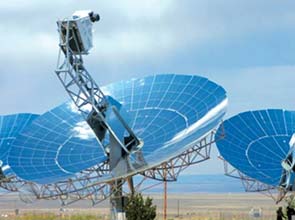 The United States Department of the Interior approved on Wednesday the construction of the innovative 663.5-megawatt Calico solar project in California, making it only the fifth large-scale solar power project designated for public land.

Ken Salazar, secretary of the interior, authorized the project to be situated on a stretch of public property measuring 4,604 acres in San Bernardino County, California.

The decision allows the Bureau of Land Management to provide project developer Tessera Solar a right-of-way grant to use the public property for three decades, subject to fees.

Initially, the proposed Calico solar project touted a nameplate generating capacity of 850 MW. Its primary equipment was to include approximately 30,000 units of the 25-kilowatt SunCatcher system. This technology functions as individual solar dishes that each concentrate heat on a small attached Stirling engine, which converts the sun’s rays into rotary power, an electrical generator that produces grid-ready electricity.

The Land Management Bureau changed Tessera’s original project design reportedly to mitigate its impact on the local ecological system. The project’s area size was cut from 8,230 acres to 4,604 acres to reduce the impact on desert tortoises and their natural habitat.

The project will now only affect 20 tortoises, from an initial estimate of 100. It will also preserve over 1,600 additional acres of high-value habitat for desert tortoises, bighorn sheep and other wildlife across the foothills of the Cady Mountains.

But despite the reduced numbers, the project is still expected to benefit the local community. The 663.5-MW solar facility is projected to generate enough clean electricity to meet the power requirements of approximately 200,000 to 500,000 homes.

It is expected to inject $650,000 each year into the local economy through tax benefits paid to San Bernardino. It will also open 400 construction jobs and an additional 136 permanent jobs.

With the approval, the project joins a list of historical decisions that the department has made as part of the administration’s effort to expedite the use of large-scale renewable energy facilities on public lands.

It is expected to qualify for federal support of approximately $1.75 billion through the Department of Energy’s recovery act loan guarantee program.

Together, the approved solar power projects are calculated to generate more than 1.8 gigawatts of renewable energy – enough to power 550,000 to 1.4 million homes.

«Through these approvals, along with recent approvals for transmission lines and other renewable energy infrastructure, we are continuing to make significant contributions to this nation’s renewable energy generation capabilities,” Mr. Salazar said.