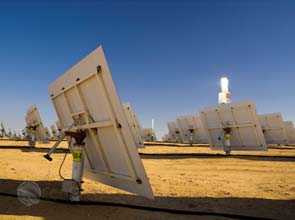 BrightSource Energy, Inc. has broken ground for construction of the 392-megawatt Ivanpah solar power system project in California, said to be the world’s largest solar power plant once completed.

The 3,500-acre Ivanpah project is expected to almost double the amount of solar thermal electricity the United States currently produces. It will be in south eastern California’s San Bernardino County, about 50 miles northwest of Needles and about five miles from the California-Nevada border.

It will power 140,000 California households and cut over 400,000 tons of carbon dioxide emissions annually, said to be like removing more than 70,000 cars off the road.

The Ivanpah project will also provide more than 1,000 jobs during construction’s peak and generate $300 million in local and state tax revenues, along with $650 million in employee wages, throughout its first 30 years of running.

Ken Salazar, secretary of the interior, and California Governor Arnold Schwarzenegger were present at the groundbreaking.

The California-based company also secured $300 million in investment from power generation company NRG Energy, which will own the project’s largest ownership stake.

NRG will now work with BrightSource in the project’s construction, ownership and operation.

BrightSource’s engineering and construction partner, Bechtel Corporation, will build the project which will include three separate solar thermal power plants.

For the power plant, BrightSource said it will use mirrors mounted on individual poles and set up directly into the ground, instead of employing land grading and concrete pads. This will allow the solar facility to build around the land’s natural contours and avoid areas of sensitive vegetation.

This design is expected to allow vegetation to co-exist within the solar field. In addition, the project will use an air-cooling system to transform steam back into water in a closed-loop cycle.

Air cooling will enable the project to only use 100 acre feet of water every year, a figure 95 percent less than what competing solar thermal technologies use.

The Ivanpah project acquired federal permits from the United State Bureau of Land Management in October 2008. Almost two years later this year, the California Energy Commission gave it the go signal, along with other projects such as the 1-gigawatt Blythe solar project in recent weeks.

In February 2010, BrightSource received a conditional commitment from the Department of Energy for $1.37 billion in loan guarantees to support the financing of Ivanpah.

“At Ivanpah, we’re demonstrating that the United States can lead in the clean energy race by building the largest solar plant in the world,” said John Woolard, president and chief executive of BrightSource Energy.