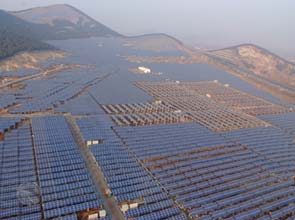 China’s largest polysilicon producer will get $100 million in investments through 2011 for its planned solar projects throughout the United States, with the help of Wells Fargo.

GCL-Poly Energy Holdings said the projects will be built by its subsidiary GCL Solar Energy Inc. No additional details were given.

GCL-Poly said the financing Wells Fargo will provide will enable GCL Solar to build projects in schools, municipalities, corporations and utilities in the United States.

“GCL Solar will build and operate solar power plants, and its customers will purchase the electricity under long-term power purchase agreements at rates equal to or lower than traditional utility rates,” GCL-Poly said.

Wells Fargo (NYSE:
WFC
) said it had provided more than $2 billion in tax-equity financing to support renewable energy projects across the country, with a production capacity of over 4,100 megawatts.

Last month, Wells Fargo announced the expansion of a program designed to make it easier and more affordable for homeowners to go solar in the United States.

In its program, qualified Southern California customers who advance funds from a home equity loan or line of credit in the amount of $15,000 or more to finance a solar energy system will receive up to $1,000 in incentives.

“As a community-based financial institution, one of the ways we can help is by offering financial solutions that help our customers save not only time and money, but also protect our environment,” said Mary Wenzel, director of Wells Fargo Environmental Affairs.

Working with Colorado solar installers, the company is also presenting its Colorado customers with the $1,000 incentive through the end of the year.

GCL-Poly is one of the world’s leading wafer suppliers, and a top green energy enterprise in China. Its yearly polysilicon production capacity is expected to reach 21,000 metric tons by the end of the year.