Germany will focus on grid expansion this 2011, says minister 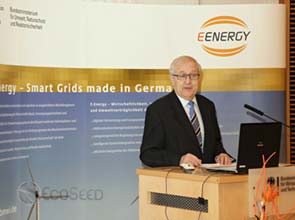 Grid expansion will be Germany’s priority under the implementation course of its Energy Concept this year, a government minister said.

Germany’s electricity networks must be readied for the fluctuations of energy from renewables such as wind and solar power as the country goes to renewable age by 2050, Rainer Brüderle, minister of economics and technology, said during the 18th annual energy conference.

Mr. Brüderle said the new Energy Concept and the 10-Point Immediate Action Program will facilitate and speed up the national grid expansion plan. The former lays out the energy strategy until 2050, while the latter outlines immediate actions the government aims to achieve at the end of 2011.

He said the grid expansion must go hand in hand with the expansion of renewable energies. He declared the launch of the 5 billion euro ($6.73 billion) loan program of state-owned bank KfW for first 10 wind farms.

The minister cited the Deutsche Energie-Agentur G.m.b.H. study, which states a need to establish up to 3,600 kilometers of new lines connecting offshore wind farms to mainland grid.

In addition, the grid expansion must include cross border interconnections that will enhance the energy trade between European countries. This will also make the country’s electricity competitive in the European Union internal energy market.

“The networks must be adapted to the ever increasing European power trading,” Mr. Brüderle said. “On our highways, we already carry goods across Europe. Our networks have to transport future electricity throughout Europe. The grid expansion will secure the supply in Germany.”

A broad social acceptance of the upgraded networks is needed to achieve the grid expansion. The minister said this includes dialogue with the network operators, the states, environmental organizations, and especially the affected citizens” entailing the government to establish a permanent forum.

This integration of renewable energies, according to Mr. Brüderle, is the focal point of this year’s Renewable Energy Sources Act (E.E.G.), and the ministry of economics will focus on opening more opportunities for renewable energy market.

“For this purpose we will consider the introduction of an optional premium market. The market premium would be paid compensation instead of the E.E.G.,” he said.

About 13 billion euros was put into the promotion of renewable energies in 2010, with large investments in solar photovoltaic. However, only about two percent of electricity was delivered from these investments.

Mr. Brüderle demanded a further review of feed-in costs during the next adjustment rates in January 2012. He asked the cooperation of the minister for the environment, Norbert Röttgen, for a fair balance of interests putting consumers as top priority.