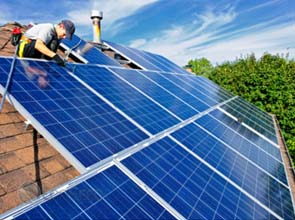 The British Department of Energy and Climate Change has rolled out a review of its feed-in tariffs scheme with the specific aim of protecting small-scale electricity generation from large-scale solar farms which might end up eating the entire budget support in the program if left unchecked.

The review was originally scheduled for next year. But because of the increasing number of large-scale solar farms, the assessment was moved to this year.

The government reportedly wants to guard investor confidence against the threat of large-scale solar farms.

British energy and climate change secretary Chris Huhne said several large solar installations have received planning permission. He said industry projections indicate there could be many more in the pipeline.

The problem with this, Mr. Huhne said, is the lack of provision in the current feed-in tariffs scheme to limit funding for large-scale commercial solar projects which might take a disproportionate amount of, or break the cap on, total funding.

“I’m concerned; this could mean that money meant for people who want to produce their own green electricity has the potential to be directed towards large-scale commercial solar projects,” Mr. Huhne said.

The feed-in tariff scheme was launched on April 2010 to encourage small-scale low-carbon installations. There are now over 21,000 installations, mostly domestic, of solar panels, wind turbines and small hydropower plants that get support from such incentive schemes in Britain.

The comprehensive review will assess all aspects of the scheme including tariff levels, administration and eligibility of technologies.

“The renewables industry is a vital piece in the green growth jigsaw and this review will provide long-term certainty while making sure homes, communities and small firms are encouraged to produce their own green electricity,” said Mr. Huhne.