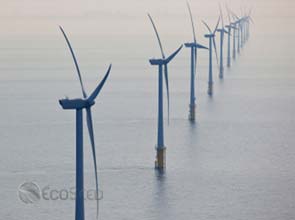 The Ontario government has postponed the development of offshore wind energy projects citing that further scientific research is necessary.

The government said it will not issue any renewable energy approvals for offshore wind projects and no such project will proceed for now – application projects under the feed-in-tariff program will not be accepted and current applications will be suspended.

“Offshore wind on freshwater lakes is a recent concept that requires a cautious approach until the science of environmental impact is clear. In contrast, the science concerning land-based wind is extensive,” said John Wilkinson, Ontario’s minister of the environment.

There is no operational offshore wind project yet in North America, but a pilot project to be located in Lake Erie, Ohio is on the pipeline.

The Ontario government, particularly the Ministry of Natural Resources, will work with the United States to ensure future projects will protect the environment particularly on both sides of the Great Lakes.

The government will also conduct research on the few operating freshwater offshore wind projects, such as the Lake Vanern pilot project in Sweden.

However, the Canadian Wind Energy Association expressed disappointment over the government’s decision to pause offshore wind development, a great potential source of clean energy, investments, and new jobs for Ontario.

“This is an unfortunate decision that surrenders the province’s leadership role in exploring the potential for offshore wind energy in the Great Lakes and creates significant uncertainty for investors,” said Robert Hornung, president of the association.

Ontario’s green energy sector has already pulled in over $1 billion in investments from the private sector and more than 20 companies have reportedly unveiled plans to establish or expand their operations in the Canadian province.

“We have already bought over 700 onshore wind turbines and our energy plan will help us continue to build more wind power and position Ontario as a global leader in renewable energy,” said Brad Duguid, Ontario’s minister of energy.

The province’s long-term energy plan calls for 10,700 megawatts of wind, solar and biomass energy by 2018, which could provide for the energy needs of two million households.

Canwea believes Canada can meet its target of producing 20 percent or more of its electricity from wind by 2025.

It also said over 2,000 megawatts of installed offshore wind energy were established in 10 countries worldwide in 2009.