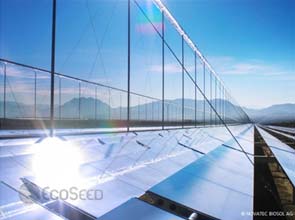 ABB also agreed to cooperate with Novatec on future solar power plant projects. The two companies did not disclose details of the transaction.

ABB said concentrated solar power is a promising renewable energy market, and thus this venture becomes beneficial to their business activities in utility and grid sectors in particular.

“The technology’s simplicity, financial viability as well as minimal water and land requirements are factors that make it particularly attractive in emerging markets, where ABB has a strong position,” said Mr. Leupp.

Novatec’s so-called Linear Fresnel C.S.P. technology has been installed in a 1.4-megawatt plant that is connected to the Spanish electricity grid since 2009. The solar company is also constructing the 30-MW Linear Fresnel power plant in Spain.

In its recent fourth quarter report, ABB expressed their intention to integrate renewable energy into their grid connections as it expects this sector is fast growing.

ABB said large orders increased by over 20 percent because of the ongoing focus on renewable energy and grid reliability.

Last year, ABB invested about $13 million in Scottish company Aquamarine Power, which developed a facility that would convert energy from waves to clean electricity.

ABB said this venture will take them closer to emerging marine energy market and recover revenues for its power systems, electronics, and medium-voltage drives.

Its capital arm – ABB Technology Ventures – made the investment in a funding round that also included a $4.8-million investment from SSE Venture Capital, the capital unit of Scottish and Southern Energy, and other investors.