AWEA: U.S. wind to perform better this year on the wings of tax credit 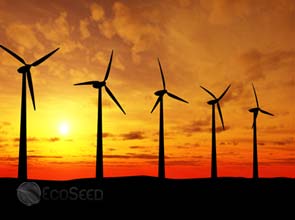 America’s wind industry could have a strong comeback this year after suffering big drops in project numbers in 2010. United States wind energy entered 2011 with over 5,600 megawatts’ worth of projects currently under construction, this according to the annual report of the American Wind Energy Association.

While the United States’ wind power industry grew by 15 percent in 2010, its overall share in the country’s energy mix slid down due to “unpredictable policies,” the report published on AWEA’s web site Thursday showed.

However, the industry only managed to install 5,116 MW of new wind capacity, barely half of 2009’s record pace.

Wind energy provided 26 percent of all new electric generating capacity in the United States last year. However, based on AWEA’s past annual reports, the figure is a drop from 39 percent in 2009 and over 40 percent in 2008.

United States wind trails China, which had 41,800 MW of wind capacity – a 62 percent improvement from its 25,800 MW capacity in 2009 – according to a January 13 report from the Chinese Renewable Energy Industries Association.

The wind industry blames policymakers for the industry’s declining performance.

“After several years of competing neck-and-neck with natural gas as the top energy source for new installed electricity capacity, in 2010 wind power fell behind, due in part to the usual culprit: unstable, short-term policy,” the report states, as quoted by Forbes.

This year, the wind association said the United States expects 5,600 MW of new capacity, to be primarily driven by a treasury grant program which reimburses as much as 30 percent of the costs of installing wind projects to developers.

“The extension of the 1603 tax credit…provided a signal to investors to continue growing wind in the United States,” Denise Bode, chief executive of AWEA, said. The credit is due to expire by the end of 2011.

“With installations at the start of 2011 well above the same time a year earlier, “the industry is likely to finish 2011 ahead of 2010 numbers,” Elizabeth Salerno, AWEA director for industry data and analysis, said in AWEA’s fourth quarter wind report published January 24.

Even though 2010 was not much of a good year for installations, the industry still managed to bring 14 new manufacturing facilities online, which was on par with 2009, according to the report.

All told, the wind industry remains on track to deliver its long-term growth target to provide 20 percent of America’s electricity by 2030, said Ms. Bode. The target was laid out by the Department of Energy during the administration of former President George W. Bush.

AWEA mentioned that the grant program enabled the construction of 10,000 MW of new wind capacity in 2009, more than double the 4,000 MW that would have been installed without the program.

«Wind’s costs have dropped over the past two years, with power purchase agreements being signed in the range of 5 to 6 cents per kilowatt-hour recently,» Ms. Salerno said.

However, with the deadline of the 1603 tax grant program nearing along with uncertainty over a possible replacement, analysts believe it will be tough for the wind industry, as well as other renewable energy segments, to maintain growth.

“The American wind industry is delivering, despite competing with energy sectors that have permanent government subsidies in place,” said Ms. Bode.

“Wind is consistently performing,” she said, “adding 35 percent of all new generating capacity since 2007— that’s twice what coal and nuclear added combined.”

While wind did come second in new generation capacity only to natural gas, natural gas had the largest single increase and took around 40 percent in 2010. Meanwhile, coal-fired plants added around 25 percent of new capacity.