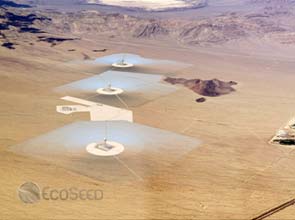 BrightSource Energy has secured the funds for the Ivanpah solar power project in California’s Mojave Desert, marked by a new federal loan and new investment from Google Inc.

BrightSource secured a $1.6 billion loan from the United States Department of Energy for Ivanpah, a project which consists of three utility-scale solar thermal power plants that together will make up the largest solar project of its kind in the world.

Total project costs are estimated at $1.967 billion for the entire 392-megawatt project.

The loan follows a separate $1.37 billion federal loan the company was assured of in February last year.

But a more significant development could be the investment – from Google Inc. – of $168 million to Ivanpah.

Google, which has been expanding its green portfolio since last year, said its $168 million new investment in Ivanpah is the company’s single largest to date.

Google invested $10 million in BrightSource in 2007 through Google.org, the company’s philanthropic arm. The current investment gives the company itself significant equity stake in the Ivanpah project.

“The DOE‘s decision to support Ivanpah with a loan guarantee is proof that large-scale solar projects are moving to the forefront of our nation‘s clean energy alternatives,” said David Crane, President of NRG Energy.

“Likewise, we welcome the decision of Google, as one of the foremost ‘thought leaders‘ in corporate America, to embrace this cutting edge clean energy technology through their equity investment in this project,” he added.

NRG Solar, a wholly owned subsidiary of NRG Energy, is the largest investor in the project, putting $300 million in Ivanpah in October 2010.

Construction on Ivanpah began in October last year and is expected to be done by the end of 2013.

BrightSource’s engineering and construction partner, California-based Bechtel Corporation, will build the project and will install 173,000 mirrors called heliostats that will surround three steam-producing towers on 3,500 acres of federal land. Bechtel is the largest engineering company in the United States.

Both will get supplied with a total of 2,600 MW of power according to the deal. The project will be connected to the electricity grid via an upgraded transmission line from S.C.E.

The project is expected to produce enough clean energy to power 140,000 homes while cutting down emissions by more than 400,000 tons annually, said to be like removing more than 70,000 cars off the road.