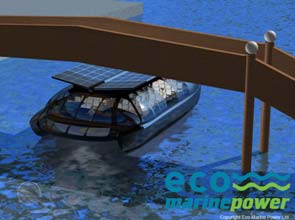 Eco Marine Power Ltd., a Japan-based company that develops solar, wind and electric marine power and propulsion systems, will be developing a solar ferry called Medaka, which will cater to water commuters.

Eco Marine aims to produce a solar-electric ferry that is a cost-effective option for ferry operators and ship owners.

Medaka will be capable of carrying around 100 to 150 seated passengers and is specifically designed to be an urban water bus.

The eco-ferry will have an estimated cruising speed of 8 knots, with a maximum speed of 12 to 14 knots, Eco Marine’s director, Greg Atkinson told EcoSeed.

Mr. Atkinson told EcoSeed that their goal is to make the solar-electric ferry run a hundred percent on electricity, saying that they are currently looking for solar modules with an efficiency of 11 to 12 percent.

These solar modules will be mounted on the roof of the Medaka, and using a marine solar panel concept developed by the company, the panels can be raised and lowered as needed. In normal operations, the panels will be at a slight angle.

However, he said that the ferry may still need to use a biofuel engine to back the generator at times.

“In normal operations, the eco-ferry will have no exhaust fumes and use no fossil fuels,” he said.

They are looking into the possibility for the onboard batteries of the vessel to be recharged when it is docked. The company is currently researching a system that can charge the batteries using renewable energy.

Staying true to the concept of being an eco-ferry, they plan to construct the whole vessel using recyclable marine grade aluminium. They will also take steps to ensure the entire manufacturing process leaves only a low carbon footprint.

Meanwhile, they are studying the basic design of Medaka to develop several different variations, such as the vessel’s size or speed, to suit different markets.

Just this February, Eco Marine announced their plans to develop the Aquarius system; rigid sail panels fitted with solar modules that can collect both wind and solar energy on board ships. A prototype of the Aquarius is scheduled to be ready for initial testing in early 2012.