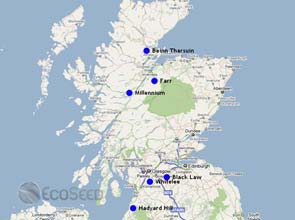 Six wind farms in Scotland were paid as much as £890,500 ($1.5 million) by the National Grid P.L.C. to switch off their turbines on a particularly windy night last month because the utility’s transmission lines could not handle all the power they produced.

A report from the London-based nonprofit Renewable Energy Foundation said the National Grid network overloaded because of high winds and heavy rains in Scotland on April 5 and April 6 last month which resulted in more wind power than the utility could absorb.

National Grid did not have the capability to transfer all that power to England and was forced to compensate wind farm operators for switching their facilities off.

In some cases, payments were as high as 20 times the value of electricity which would otherwise have been generated and sold.

John Constable, director of policy and research for the foundation, said not enough care has been taken to ensure that the electricity transmission grid could transfer power to other parts of Britain when it was needed.

«Hasty attempts to meet targets for renewable energy mean some Scottish wind farms are now in the extraordinary position of not only printing money when they generate, but printing it even faster when they throw their energy away,» he told the Sunday Times.

The largest payment was given to Scottish Power-owned Whitelee wind farm in East Renfrewshire, which got £308,000 in April. It was followed by RWE NPower-owned Farr wind farm south of Inverness getting paid £265,000 the same month.

Two other wind farms owned by Scottish Power, the Blacklaw facility in Lanarkshire and Beinn Tharsuin north of Alness, received £130,000 and £11,500 respectively.

The Hadyard Hill wind farm in South Ayrshire owned by SSE Renewables was given £140,000 while the Millennium wind farm by Falck Renewables received £33,000.

The six wind farms have a total power capacity of 710 megawatts. Whitelee, among the largest in Europe, can produce 322 MW.

The Renewable Energy Foundation estimates that payments that have been made to shut down wind farms because of excess power to date in total have reached approximately £1 million.

‘Too many wind farms’

The foundation, which has long argued that the government is building too many wind farms in northern Britain, said the payments paid out to wind farms raise concerns because it will ultimately end up on customers’ bills.

“We conclude that the scale and pace of wind development in Britain needs to be rethought, and more emphasis placed on the provision of economical solutions to the grid-balancing problem,” the group said.

However, it said upgrading the grid “is not cost free,” and would still impact consumer bills, saying that all currently available solutions for the problems posed by intermittent renewable energy sources such as wind power are expensive.

The group recommends using more flexible renewable energy sources, including dedicated biomass, biomass co-firing, anaerobic digestion and energy from waste- under-represented in the renewables mix compared with solar and wind- since they are cheaper for the consumer if an energy producer decides to use them.

A report from Washington-based environmental policy organization World Resources Institute last month said the European Union, along with China and the United States, does not have the power transmission infrastructure to transmit electricity from renewable energy sources effectively.

In the bloc, investments in transmission projects tend to be difficult because of local opposition to large-scale infrastructure projects in some areas.

But the study asserts that the bloc’s slow economic growth can be traced to poor transnational coordination and enforcement powers.