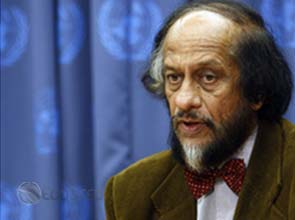 The chairman of the world’s No. 1 international body for the assessment of climate change stressed that his agency’s report will be useful for the global renewable energy industry.

“The [Intergovernmental Panel on Climate Change’s] Special Report on Renewable Energy Sources and Climate Change Mitigation is the most comprehensive compilation of knowledge on renewable energy assessed by the leading scientists, technologists and policy analysts familiar with this field, from all over the world,” the I.P.C.C.’s Rajendra K. Pachauri told EcoSeed in an interview.

“Leaders of business and industry will now be able to assess the prospects for growth of renewable energy markets based on the comparative economic analysis presented in the report and scenarios of growth of production of energy from renewable sources and usage in the future,” Mr. Pachauri said.

A summary of the report was released on Monday, May 9, after being approved by member countries of the I.P.C.C. in Abu Dhabi during the 11th session of its working group which focuses specially on prospects for climate change mitigation.

The panel said the report could inform the major work it is currently conducting – the Fifth Assessment Report on climate change that will be finalized in September 2014, summarizing humanity’s most advanced knowledge on climate change.

‘Public policies will be key’

According to the I.P.C.C., the findings show that it is not that availability of the resource but the public policies that will either expand or constrain renewable energy development over the coming decades.

The overall conclusion of the report is that renewables will take an increasing slice of the energy market. Over 120 researchers were involved in the I.P.C.C. study said to be at least a thousand pages long.

“The [report] not only looks at the technical potential of major renewable energy technologies, but also the prospects of their commercialization and large scale dissemination in the future, based on 164 different scenarios drawn from the literature,” Mr. Pachauri said.

Among the most optimistic of the these scenarios projects renewable energy accounting for as much as 77 percent of the world‘s energy demand by 2050, amounting to about 314 exajoules of 407 exajoules per year. The figure is over three times the annual energy supply in the United States in 2005.

“Given the fact that I.P.C.C.’s reports are policy relevant without being policy prescriptive, this particular document will receive a great deal of interest from policy makers, business organizations, researchers and the public at large,” Mr. Pachauri said.

“The report clearly demonstrates that renewable technologies could supply the world with more energy than it would ever need, and at a highly competitive cost,” said Steve Sawyer, the secretary general of the Global Wind Energy Council.

Christian Kjaer, chief executive officer of the European Wind Energy Association, said in their official blog that the projection of having 77 percent of our total energy demand sated by renewable energy can only be expected. He pointed out that renewable sources are already seen outpacing nuclear.

By 2030, he said that wind power alone could provide 10 percent of total global electricity demand.

A 26-page summary of the report has been released by the organization. The I.P.C.C. said the full report will be ready two to three weeks from now.

Youba Sokona, co-chair of the mitigation working group, said the report was also intended to bring clarity on the ongoing debate of the future role of renewables especially for meeting the needs of the poor and in powering both developed and developing economies – an issue which he said triggers “sharply polarized views.”

In October last year, the I.P.C.C. said it would change its practices following heavy criticism after errors were found in its 2007 report, particularly concerning the melting of the Himalayas by 2035. But Mr. Pachauri then said that the 2007 report’s basic finding – that humans’ use of fossil fuels are the main cause of recent global warming – was unaffected by errors.