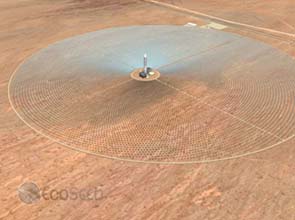 The 110-megawatt Crescent Dunes Solar Energy Project, which will also be the first of its kind in the United States, will be built 14 miles northwest of Tonopah, Nevada on 2,250 acres of land leased from the Bureau of Land Management.

The offer means the federal government is willing to secure SolarReserve’s loans to its creditors, provided it meets pending requirements, in the case of a default. If approved, the solar farm’s construction will start this summer and will be online in late 2013.

Power from the project will be sold to Nevada Power Co., a utility subsidiary of NV Energy Inc. and will help NV Energy meet Nevada’s renewable portfolio standard goal, requiring utilities to get 20 percent of their energy from renewable energy sources by 2015.

Crescent Dunes and other similar projects

SolarReserve uses as many as 17,500 flat mirrors called heliostats to concentrate and direct sunlight to a receiver tank on top of a 640-foot tower. The tank contains a mix of molten sodium and potassium salts heated to 1,050 degrees Fahrenheit to generate steam to run an electricity generator.

The design is similar to BrightSource Energy’s 392-MW Ivanpah project currently being built in the Mojave Desert. The Oakland, California-based company finalized its $1.6 billion loan guarantee with the Energy department last April 12.

Comprised of three utility-scale solar plants, Ivanpah has also been called as the world’s largest concentrating solar plant that uses water instead of salt for steam generation. The downside of using water, however, is that the power plants tend to collect less heat under cloudy skies.

In comparison, salt releases heat at a slower rate. The Energy Department said molten salt tanks can store the sun’s thermal energy for up to 10 hours, permitting steady, uninterrupted power during high demand despite cloud cover, and even at night.

Abengoa Solar’s 250-MW Solana project also claimed to be the largest concentrating solar power plant in the world using molten salt, but it uses curved parabolic mirrors to direct sunlight onto a receiver tube in front of it. The company finalized its $1.45 billion loan guarantee in December 21 to finance Solana, currently being built in Gila Bend, Arizona

SolarReserve is one of seven solar power generation projects selected by the department for a Federal Treasury loan guarantee since it launched the program in 2009.

Jonathan Silver, the head of the agency’s loan programs office, has earlier said their loan guarantee program for renewable energy generation projects will not be able to accommodate all funding applicants as deadline draws near.

The Section 1705 program, one of the three types of loans or loan guarantees being offered by the department, is set to expire on September 30. Mr. Silver said only projects that can start construction and close their loan guarantees by that date will be considered.