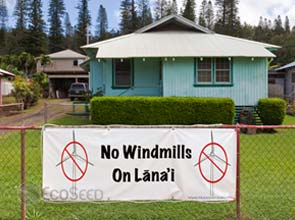 Acoustic researchers at the University of Adelaide in Australia are investigating the reasons behind one of wind turbines’ major issues – the noise that they produce.

Researchers already have an idea on which areas of wind turbine operations to study to address noise. Studies are done to zero in on just any one cause and how designs can be improved accordingly.

There are two potential sources of noise in wind turbines – the turbine blades passing through the air as the hub rotates and the gearbox and the generator inside the nacelle.

Con Doolan of the university’s School of Mechanical Engineering, said noise generated from wind turbines is trailing edge or airfoil noise, the same sort of noise generated at the edge of aircraft wings. Generally, the noise comes from the sharp edge of the blade as turbulent air flows over it.

But he stressed that the interaction between turbulence and the blade edge and how it makes louder noise is still not clear.

“If we can understand this fundamental science, we can then look at ways of controlling the noise, through changing the shape of the rotor blades or using active control devices at the blade edges to disrupt the pattern of turbulence and so reduce the noise,” said Mr. Doolan.

The researchers believe that the broadband hissing noise modulates up and down as the blades rotate, causing an annoyance.

“Wind turbine noise is controversial but there’s no doubt that there is noise and that it seems to be more annoying than other types of noise at the same level,” Mr. Doolan said.

“Finding ways of controlling and reducing this noise will help us make the most of this very effective means of generating large amounts of electricity with next to zero carbon emissions.”

Aside from trying to understand what causes noise, the team is also developing a computer model to predict the noise output from wind farms.

By doing so, an accurate assessment can be done in terms of the effectiveness of potential noise-reducing designs and control methods.

A study done by the Lawrence Technological University in Michigan found that depending on the turbine model and the wind speed, aerodynamic noise may be heard like a buzzing, whooshing, pulsing and even sizzling sound.

A thumping sound is also produced when each of the blades of the wind turbine passes the foot of the tower while two or more turbines may combine to create an oscillating or thumping “wa-wa” effect.