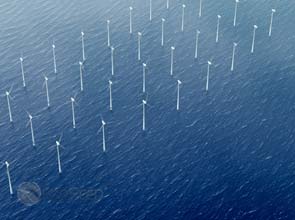 Eleven wind energy companies have applied for leases in federal waters off the coast of New Jersey to construct offshore wind farms as large as 3 gigawatts, the state’s Department of Environmental Protection announced.

The companies want to develop wind farms on 553.55 square miles of coastal waters between Barnegat Light and Avalon in New Jersey. This leasing area begins seven nautical miles off the shoreline and extends up to 23 nautical miles into the ocean.

Wind farms proposed on the site range from 350 megawatts to as much as 3,000 MW, totaling roughly 12.5 GW. But several projects are proposed for the same areas, so the total output would be much less, the department said.

The proposals come in response to a call for projects made in April by the Bureau of Ocean Energy Management, Regulation and Enforcement, marking the first step in the commercial leasing process.

The bureau will review the qualifications of each developer along with their proposals. Later it will hold a competitive bidding process for leases.

“This robust response from offshore wind developers makes it clear that commercial interest in development of wind turbines is strong,” says Bob Martin, commissioner of the New Jersey Department of Environmental Protection.

The stretch of ocean in New Jersey eyed for offshore wind farms is one of four East Coast areas chosen by the federal government as priority wind energy development sites. Although New Jersey’s terrain is not considered viable for onshore wind power, the unobstructed winds offshore are seen as holding wind energy promise.

Shallow waters off Delaware, Maryland and Massachusetts have also been identified by the Interior Department as having good potential for wind farm construction.

In 2009, the ocean energy bureau issued temporary leases to Deepwater Wind L.L.C., Bluewater and Fishermen’s Energy of New Jersey L.L.C., authorizing them to develop 350 MW worth offshore wind projects in the state. The leases, however, do not authorize construction. The bureau is still awaiting project plans for assessment.

The master plan is less ambitious than the 2008 plan which aimed for 30 percent renewable energy generation by 2021, with the new target of 22.5 percent. But Republican Mr. Christie insisted that he is a supporter of renewable energy, especially wind.

The governor endorsed an initial target of at least 1.1 GW subsidized through the certificate program.

The 141-page master plan states that New Jersey has “high quality, harvestable offshore wind,” although it also notes that offshore wind power will initially be more expensive than other energy sources.

The plan estimates the “levelized” cost of electricity from offshore wind power to be around $251 per megawatt-hour, more than double the cost of conventional energy sources.

Acknowledging a growing trend for bigger turbine designs, the plan assumed manufacturing facilities must be located at nearby Port of Paulsboro or port districts in New York and New Jersey. The state has identified nearly 500 companies that could become involved in the development of wind power.

According to the energy master plan, there have been no offshore wind plants constructed in the United States as of the second quarter 2011, nor have there been any offshore wind project that has completed project financing.