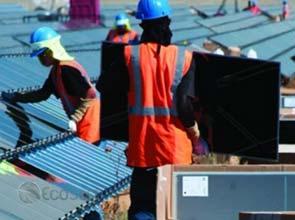 The commitments are either for full or partial loan guarantees, the latter meaning the agency will only back up to 80 percent of the loan. Considering the partial loans, the energy department will guarantee $3.728 billion in total for all three projects.

The solar projects are expected to generate 1,330 megawatts of power in total, powering 274,000 California homes with reduced emissions worth 1.81 million metric tons yearly.

The other two conditional commitments announced will be for partial loan guarantees under the Financial Institution Partnership Program. Two separate groups of investors funding the projects are responsible for the remaining portion of the debts.

A partially D.O.E-backed $1.88 billion loan was offered to the 550-MW Desert Sunlight project to be built on Bureau of Land Management property in eastern Riverside County. Split into two phases, electricity from the first 300-MW phase will be sold to PG&E and the second 250-MW phase to Southern California Edison.

Private funders include a group of investors and commercial banks led by Goldman Sachs Lending Partners and Citibank.

The other partial loan guarantee recipient, 550-MW Topaz Solar Farms, was offered $1.93 billion. It will be built in eastern San Luis Obispo County and its electricity sold to PG&E. The project is expected to begin construction in 2011 and be fully operational by 2014.

The $2.6 billion project will be funded by a different syndicate of investors and commercial banks, run in this case by The Royal Bank of Scotland.

The D.O.E.’s Loan Guarantee Program has granted almost $35 billion to support 37 clean energy projects, making it the largest energy project finance operator in the world. The program has issued $39 billion worth of conditional loan commitments to 20 power generation projects to date.

The loan guarantees are under the Section 1705 program, one of three programs making up the scheme. This program had the most applications with 21 projects, half of which coming from solar generators or manufacturers.

In total, Section 1705 has given over $17 billion in guarantees, most of which are in California and other southwestern states.

As loan guarantee offers, all of the projects must meet certain conditions before they are finalized. The energy department, however, must distribute all the funds before the loan guarantee program expires in September.

All three projects will use Arizona-based First Solar’s cadmium telluride thin-film PV cells. The Desert Sunlight and Topaz Solar projects will use 8.8 million and 8.5 million of the cadmium telluride cells, respectively, while the Antelope Valley project will feature a utility-scale deployment of inverters with voltage regulation and monitoring technologies that are new to the U.S. market.

First Solar will produce the materials at its recently expanded manufacturing plant in Perrysburg, Ohio, and its new factory being built in Mesa, Arizona.