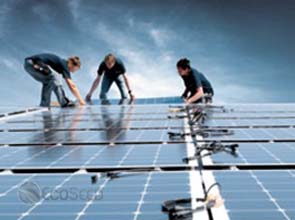 Germany’s Solon S.E. saw its stock prices fall on the Frankfurt Stock Exchange after it trimmed its expected revenues for the year due to low demand for PV panels in the two biggest solar markets.

Revenue for 2011 will drop to 500 million euros ($709 million), down from 619 million euros announced in March 31, the Berlin-based company said in a statement Tuesday. On the same day, Solon’s share prices fell to as much as 15 percent to 1.81 euros a share in Frankfurt trading.

“The reason for the weaker performance is the continuation of the dissatisfactory demand situation in Germany and Italy, the company’s most important markets,” Therese Raatz, investor relations for Solon, said in a statement.

In Germany, demand picked up only slightly in the second quarter after starting weak this year, according to Ms. Raatz. Demand in Italy, however, collapsed in anticipation of the change in subsidy conditions effective June 1, 2011.

“There, too, the recovery of business has been extremely slow since market participants first had to adapt to the new conditions,” she said.

Like most countries in Europe, Germany planned to drop its feed-in tariff rates to ensure that the government can provide subsidies since the industry boom has been found counterproductive. In July 2010, tariffs for solar roofs had been reduced by 13 percent while open-field installations, such as those set up on agricultural land, fell by 12 percent.

Under the plan, solar subsidies will be cut by 15 percent when the PV market grows beyond projections to help control oversupply of project applications. Conversely, the rates will be slashed by 3 percent at times of declining growth to spur interest from business. If the market slows down and generates less than 5.3 gigawatts, the expected demand from March to May 2011, the feed-in tariff adjustment will not occur until 2012.

Italy, the world’s second-largest solar market after Germany, reduced its incentive rates for PV last May to help consumers who pay for those incentives through their electric bills. It will also limit projects to curb explosive growth in solar project installations seen in recent years in Europe.

According to Germany-based market research firm EuPD Research, incentives given to PV projects will be cut monthly until 2012 and will continue with half year reductions in 2013. Funding for large-scale PV systems will also be capped for the first time.

SunPower Corp., a California-based maker of solar photovoltaic panels, also reported a significant drop in its profits on lowered panel sales also largely from changes in Italy’s solar subsidies. Italy was SunPower’s largest market in 2010, accounting for about 40 percent of its revenue, according to a document from the United States Securities and Exchange Commission.

“We plan to revise our 2011 guidance before the end of the second quarter to reflect the recent changes in Italy,” said Dennis Arriola, SunPower’s chief financial officer.

In the first three months of 2011, Solon which in 1998 became the first German solar company to sell shares to the public, generated consolidated revenues of 65.2 million euros which fell short of its 88.3 million euros in the first quarter of 2010.

The weakness of the German market was reflected in the fact that the company generated 80 percent of its revenues outside of its home market, primarily in Italy and the United States.