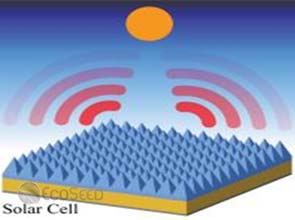 By adding a specially patterned layer of silica glass to a solar cell, a team of researchers from Stanford University have improved its ability to transform sunlight to clean energy.

Part of the reason for this loss of energy is due to solar cells overheating. Under normal operating conditions, solar cells can easily reach temperatures of up to 130 degrees Fahrenheit or more. These conditions can sap efficiency and shorten the lifespan of a solar cell.

For every one-degree raise in temperature, the efficiency of a solar cell is said to decline by about half a percent. For every increase of 18 degrees Fahrenheit, the rate of aging of a solar cell doubles.

Actively cooling solar cells, however, through the use of ventilation or coolants would be expensive and at odds to the need to optimize exposure to the sun.

The newly proposed design from electrical engineering professor Shanhui Fan and his team shepherds away unwanted thermal radiation, allowing a solar cell to cool itself and prevent overheating.

The design incorporates tiny pyramid and cone-shaped structures embedded into a thin layer of silica glass. This layer of glass redirects unwanted heat in the form of solar radiation from the surface of the solar cell.

In order to deflect this unwanted heat, the patterned silica layer takes into account several of the most basic properties of light.

When sunlight enters a solar cell, the different wavelengths of light interact with the cell in very different ways. For example, visible light is the best at generating electricity while infrared is more efficient at carrying head. Different wavelengths also bend and refract differently, depending on the type and shape of the materials they pass through.

The silica layer allows visible light to pass through the added silica layer while enhancing the amount of energy that is able to be carried away from the lights at thermal wavelengths.

«Silica is transparent to visible light, but it is also possible to fine-tune how it bends and refracts light of very specific wavelengths. A carefully designed layer of silica would not degrade the performance of the solar cell but it would enhance radiation at the predetermined thermal wavelengths to send the solar cell’s heat away more effectively,» explained Mr. Fan.

By precisely controlling the width and height of the pyramids and micro-cones in their silica layers, they were able to refract and redirect only the unwanted infrared wavelengths away from the solar cell.

The researchers are currently fabricating these devices and performing experimental tests on their design. While it has proved successful in the lab, they have yet to demonstrate that the design will work in an outdoor environment which would be the next necessary step to take towards commercialization. – EcoSeed Staff