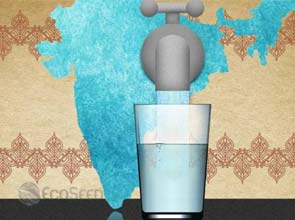 A solar powered desalination technology known as electrodialysis could be the key to providing clean, palatable drinking water in rural India.

Around 60 percent of India is underlain by salty ground water and, according to an analysis from researchers from the Massachusetts Institute of Technology, electrodialysis could make it available for human used.

On average, the ground water has a relatively low level of salinity (500 to 3,000 milligrams per liter), such moderately salty water is not directly toxic, but it can have long-term effects on health.

Since many rural villages lack reliable access to electrical power, the fact that electrodialysis can be powered using solar power is especially attractive. An electodialysis system paired with a simple set of solar panels and a battery system could supply and economically viable means to meet the water needs of 2,000 to 5,000 people.

Electrodialysis works by passing a stream of water between two electrodes with opposite charges. Salt dissolved in water consists of positive and negative ions and the electrodes pull these ions out of the water. A series of membranes then further filter out the salt from the water.

Compared to reverse osmosis, another common desalination technology, electrodialysis is cheaper and uses less energy. It also recovers a much higher percentage of water – more than 90 percent, compared to reverse-osmosis’ 40 to 60 percent.

Ms. Wright and Mr. Winter plan to put together a working prototype of a village-scale electrodialysis system for field evaluations in India in January. According to them, a village-scale electrodialysis system would be more effective because fewer people would be left out and because home-based systems would be harder to monitor to ensure effective water treatment.

The researchers also believe that this technology could be useful for use in disaster relief operations as well as for military use in remote locations.

The research was funded by Jain Irrigation Systems, an Indian company that builds and installs solar-power systems, and sponsored by the Tata Center for Technology and Design at M.I.T. – EcoSeed Staff