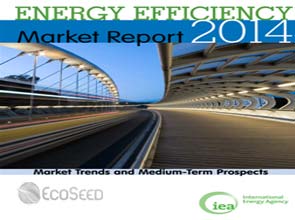 According to the report, Energy Efficiency Market Report 2014, investments in energy efficiency are helping to improve energy productivity – the amount of energy needed to produce a unit of gross domestic product.

The global energy efficiency market is worth $310 billion yearly and still growing, finds a report released by the International Energy Agency.

According to the report, Energy Efficiency Market Report 2014, investments in energy efficiency are helping to improve energy productivity – the amount of energy needed to produce a unit of gross domestic product.

“Energy efficiency is the invisible powerhouse in I.E.A. countries and beyond, working behind the scenes to improve our energy security, lower our energy bills and move us closer to reaching our climate goals,” said Maria van der Hoeven, I.E.A.’s executive director.

Among the 18 countries that the I.E.A. has evaluated, the total final energy consumption was down 5 percent between 2001 and 2011 chiefly as a result in investing in energy efficiency.

In fact, the cumulative avoided energy consumption over the decade from energy efficiency in the evaluated countries reached 1,732 million tons of oil equivalent – larger than the energy demand of the U.S. and Germany combined in 2012.

The report also shows that energy efficiency investments made over the past four decades have helped avoid more energy consumption than the total final consumption of the European Union in 2011.

“Energy efficiency is moving from a niche interest to an established market segment with increasing interest from institutional lenders and investors. As energy efficiency is essential to meeting our climate goals while supporting economic growth, the increasing use of finance is a welcome development,” said Ms. Van der Hoeven.

“To fully expand this market, initiatives to continue to reduce barriers will need to strengthen,” she added.

I.E.A. notes that energy efficiency represents the most important plank in efforts to decarbonizes the global energy system and achieve the world’s climate objectives. In an I.E.A. scenario consistent with limiting the long-term increase in global temperatures to no more than 2 degrees Celsius, energy efficiency has the biggest share of emissions reductions with 40 percent. – EcoSeed Staff