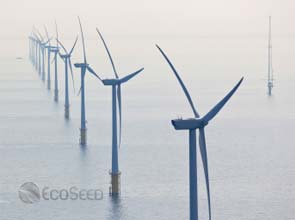 The company has received consent from the Scottish Ministers for the NeartnaGaoithe offshore wind project to be built in the Outer Forth Estuary in the North Sea.

Mainstream Renewable Power will be building and operating a 450 megawatt offshore wind farm in Scotland.

The company has received consent from the Scottish Ministers for the NeartnaGaoithe offshore wind project to be built in the Outer Forth Estuary in the North Sea.

The project will be the first large-scale offshore wind farm constructed and operated in Scottish waters to be directly connected to the Scottish electricity system. It is expected to start pre-construction activities next year and begin generating electricity by 2018.

The wind farm will consist of up to 75 wind turbines and will occupy an area of approximately 80 square kilometers. The subsea cable which will allow transmission of the wind farm’s power to the grid will come ashore at Thorntonloc Beach in East Lothian and grid connection is planned for December 2016.

The 450 MW wind farm will deliver enough power from 325,000 homes, more than the number of homes in Edinburgh and equal to 3.7 percent of Scotland’s total electricity demand.

NearthnaGaoithe represents a capital expenditure investment of around £1.5 billion and is on track to be the first offshore wind farm in the United Kingdom to attract true non-recourse project finance at the construction stage. It has pre-qualified for the Infrastructure U.K. Treasury Guarantee and European Investment Bank funding. – EcoSeed Staff