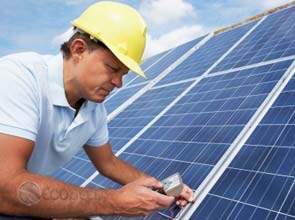 OnForce Solar announced the completion of construction on a 2.364 megawatt solar array for the town of Clarkstown on October 29. The array is built on a decommissioned, capped landfill in West Nyack.

“We are very proud to be the first municipality in New York to install a solar field on a capped landfill. Councilman Hoehmann, who first proposed this idea in 2009, town officials, our consultants H2M architects + engineers, and I have been working on this project for several years and we are excited to see it finally come to fruition,” said Clarkstown Supervisor Alex Gromack.

“Changes in state law including the net metering law and enhanced incentives made it possible to seek a public private partnership to create the first in the state large scale solar field on a landfill. The benefits are many and go far beyond environmental, to include predictability and long-term prolonged savings to one of the most volatile areas of our operational budget, namely energy costs,” said Councilman George Hoehmann.

The solar project is a public/private partnership and, under the terms of the agreement, there was no expense on Clarkstown.

OnForce Solar invested $6 million to install, operate and maintain the installation pursuant to a 20-year power purchase agreement. Additionally, the town was reimbursed $100,000 to cover any out-of-pocket expenses.

The solar system installation was made possible, in part, through support that the Town of Clarkstown received from the New York State Energy Research and Development Authority through Governor Cuomo’s NY-Sun initiative.

Another solar landfill initiative, this one in New York City is the Freshkills park installation by SunEdison. This solar initative will produce enough power for 2,000 homes (see related story). – EcoSeed Staff