Rare, Hairy Nautilus Spotted For The First Time in 30 Years 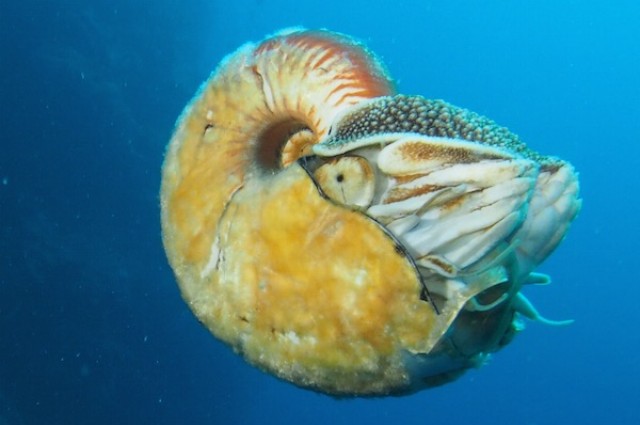 Distant relatives of squid and cuttlefish, nautiluses are an ancient lineage often nicknamed “living fossils” because their shells have appeared in the archaeological record for over 500 million years. They’ve survived two of the planet’s largest mass extinctions. This summer, researchers have spotted a rare nautilus called Allonautilus scrobiculatus for the first time in three decades. Until now, only two people have ever laid eyes on it.

Allonautilus was first discovered in 1984 off of Ndrova Island in Papua New Guinea by Bruce Saunders of Bryn Mawr College. He and theUniversity of Washington’s Peter Ward collected several specimens and found they were from a new species based on their gills, jaws, shell shape, and male reproductive structures. The animal was spotted once more in the wild in 1986, and then not seen again until July of this year when Ward returned to the South Pacific to survey nautilus populations.

Because nautiluses are scavengers, his team set up bait-on-a-stick systems every evening – fish and chicken meat were suspended on a pole between 150 and 400 meters (500 and 1,300 feet) below the surface, then the surroundings were filmed for 12 hours. “There were about 30 guys involved and each day we would all watch the movies from the night before at 8X speed. There were a lot of ‘ohs’ and ‘ahs,’” Ward saidin a statement.

One night, footage taken off the coast of Ndrova Island revealed Allonautilus approaching the bait. Another nautilus showed up, and the two fought until a sunfish arrived. “For the next two hours, the sunfish just kept whacking them with its tail,” Ward added.To catch a few, the team used bait traps at a depth of about 180 meters (600 feet). Once the nautiluses were brought to the surface, the team measured the animals and collected small tissue, shell, and mucous samples before releasing them back.

“Some features of the nautilus – like the shell giving it the ‘living fossil’ label – may not have changed for a long time, but other parts have,” Ward explained. Allonautilus sports a thick, hairy, slimy covering on its shell(as youcan seein the photos).

They also found that many nautilus populations are isolated from one another – genetically and ecologically – because they can only inhabit a narrow range of ocean depth. “They swim just above the bottom of wherever they are,” Ward said. “Just like submarines, they have ‘fail depths’ where they’ll die if they go too deep, and surface waters are so warm that they usually can’t go up there.” That means once they’re gone from that one place – such as a tiny island in the case of Allonautilus – they’re gone for good.