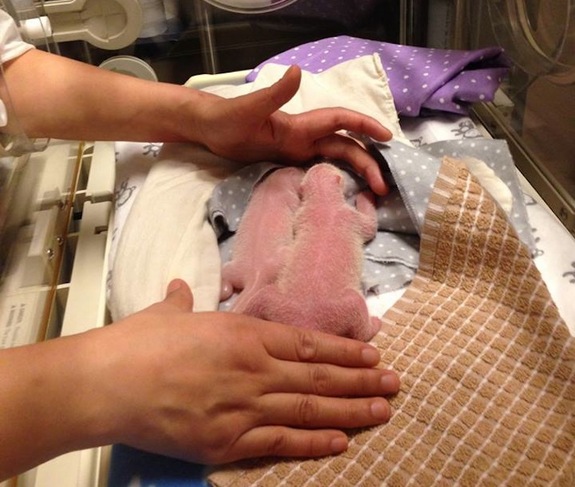 Two giant-panda cubs were born today (Oct. 13) at the Toronto Zoo, becoming the first pandas ever born on Canadian soil.

«We are so proud to be contributing to the ongoing survival of this endangered species,» Tracogna said in a statement.

The twin cubs have bulbous heads, and their tiny, pink bodies are covered in fuzzy, white hair. Giant pandas are typically born blind, and zoo representatives say it could be months before they are able to determine the sex and paternity of the cubs.

Shortly after the first cub was born, Er Shun’s maternal instincts kicked in, and she began cradling and cleaning the tiny fur ball. Both cubs have been bonding with their mother, according to zoo staff, but they’ll remain in the maternity area, away from public view, for the next several months.

The Toronto Zoo is working with panda experts from the Chengdu Research Base of Giant Panda Breeding in China. Er Shun and her male companion, Da Mao, are currently on loan to the Toronto Zoo from China, as part of a long-term conservation and breeding program. The giant pandas will remain in Toronto until 2018, and then will relocate to the Calgary Zoo in Alberta.

«We look forward to sharing our learningswith scientists around the world in the hope this will help us save this endangered species,» Councillor Raymond Cho, chairman of the Toronto ZooBoard of Management, said in a statement.