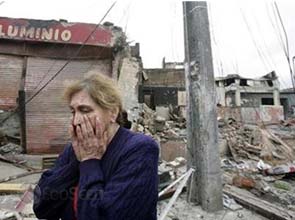 The 8.8-magnitude earthquake that struck Chile in February cost $30 billion. Landslides and floods last summer in China caused $18 billion in losses, data compiled by the Center for Research on the Epidemiology of Disasters showed.

Although Haiti’s January 12 earthquake was the deadliest event of 2010, killing 316,000 people according to the government in Port-au-Prince, its economic toll was $8 billion. The July-August floods in Pakistan cost $9.5 billion.

«The accumulated wealth that is affected by disaster events is growing,» she told a news briefing in Geneva, where most of the United Nations emergency and aid operations are based.

Cities are particularly vulnerable to big economic losses when poorly-maintained infrastructure is rattled by earthquakes or exposed to big storms, Ms. Wahlstrom said.

«With more extreme weather events, and more earthquakes in urban areas, the state of repair or disrepair in urban areas is really critical,» she said.

The most populous cities on earthquake fault lines include Mexico City, New York, Mumbai, Delhi, Shanghai, Kolkata, Jakarta and Tokyo, according to the United Nations International Strategy for Disaster Reduction.

Many people also live in parts of urban areas vulnerable to landslides and floods, which are anticipated to occur more often as a result of climate change, Ms. Wahlstrom said, also warning of rising risks from «silent events» like droughts.

The storms, earthquakes, heat waves and cold snaps affected 207 million people and killed 296,800, according to the data, which does not incorporate an increase of Haiti’s death toll announced earlier this month by Prime Minister Jean-Max Bellerive.

The global toll estimates that 55,736 people died from a summer heat wave in Russia which led to crop failures and helped drive up food prices.

It also says 2,968 people were killed in an April earthquake in China and 1,985 died from the Pakistani floods.

The 2009 economic price tag of $34.9 billion was unusually low because of the lack of a major weather or climate event in the period, which nonetheless saw floods and typhoons in Asia and an earthquake in Indonesia.

A major earthquake in China in 2008 caused $86 billion in damage, bringing that year’s economic toll to approximately $200 billion. In 2005, the hurricanes that struck the southern United States drove up the global disaster toll to nearly $250 billion.

The economic cost estimates are based on data from national authorities as well as insurance companies including Swiss Re, Munich Re and Lloyd’s. C.R.E.D. is part of the University of Louvain in Belgium and maintains a database of international disasters for the United Nations.