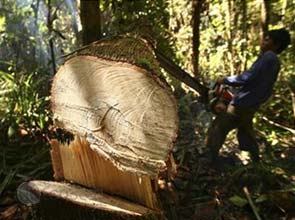 «Any nation can do more. But they (Indonesia) are doing a lot,» Environment Minister Erik Solheim told Reuters during a conference in Oslo on ways to protect carbon-rich rainforests.

Indonesia agreed a two-year moratorium on clearing rainforests last month, five months later than agreed under a 2010 deal with Norway that foresees $1 billion in aid to protect forests as part of a long-term fight against climate change.

Kuntoro Mangkusubroto, the head of the Indonesian task force on protecting forests, said the moratorium was the strictest possible, after taking account of rival interests such as from palm oil producers, loggers or miners.

«While the challenges tower ahead of us, I ask you…to bear with me as we travel through the maze to create long-lasting reform to reduce emissions,» he said in a speech.

Some environmentalists say Indonesia’s moratorium, with a long list of exemptions, is too weak.

Among problems faced by Indonesia include a lack of maps with a big enough scale to outline the boundaries of areas covered by the moratorium, Mr. Mangkusubroto said.

Worldwide, deforestation accounts for perhaps a sixth of all greenhouse gas emissions by human activities, blamed for heating the planet and bringing more droughts, heatwaves, mudslides and rising sea levels. Trees soak up carbon dioxide as they grow and release it when they rot or are burned to clear land.

Mr. Solheim declined to comment on a report by the London-based Environmental Investigation Agency that Malaysian Palm oil firm Kuala Lumpur Kepong – in which Norway’s $558 billion sovereign wealth fund has a stake – had violated the forest clearing ban on the first day last month.

KLK has called the report «preposterous.”

Mr. Solheim said donors had to take risks in aid projects to slow deforestation, saying the alternative of allowing the destruction of forests was far worse.

But he also said in a speech that there had to be results. «No developed nation will provide money if it believes it will end up in corruption, mismanagement and no results,» he said.

Other experts said that disputes over land ownership, from the Amazon to the Congo basin, were among barriers to a U.N.-backed project known as REDD, or Reduced Emissions from Deforestation and forest Degradation.

«Unclear tenure is a problem everywhere,» said Frances Seymour, head of the Center for International Forestry Research. In many poor countries, the government, indigenous peoples and settlers often have competing claims.

«Unless we address the issue of ownership…it becomes a free for all,» said Yemi Katerere, head of the U.N. REDD Secretariat in Geneva.