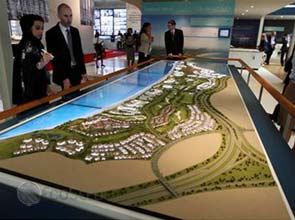 From an indoor ski slope to the tallest building on the planet to a series of man-made islands and manicured golf courses kept lush with desalinated water, Dubai and its fellow emirates are strewn with symbols of the defiance of nature.

Its extravagant developments have lured the super-rich and the super-famous, but attracted criticism from those who say such rapid development is destroying the natural environment.

In a shift in keeping with a property slump that hit Dubai World – the conglomerate responsible for many of Dubai’s most ambitious developments – the U.A.E. has moved its marketing toward idyllic, natural islands off the coast of Abu Dhabi.

It has promised to get 7 percent of its energy needs from renewable sources by 2020. It has also embarked on the Masdar project to build what it says will be the world’s first zero emissions, zero waste city, though the completion date has recently been put back to 2025 from 2020.

Not everyone is convinced real changes are afoot.

«All of this is green, advanced-tech branding, not deep, strategic change of the sort that would propel the Gulf states into the 21st century,» one internationally-renowned specialist in sustainable development said. «The Emirates can and must do better than 7 percent in 10 years.»

He asked not to be named because he wanted to maintain relations with the U.A.E. «to nudge them in a saner direction.»

The OPEC member and world’s third-largest oil exporter has one of the highest per capita carbon footprints in the world.

Its population of around 6 million burns more than half as much gas as Germany, home to more than 80 million people.

The number of private jet flights whizzing in and out of Dubai has continued to rise though economic growth has slowed, and its inhabitants take more taxi rides than journeys on the new, but often empty, Dubai Metro.

Abu Dhabi’s investment in expanding its all-important oil and gas industry – $30 billion in the 12 months to March 2010 – clearly outpaces its environmental spending.

But its investment in greener energy, as part of initiatives across the Gulf Cooperation Council, has grown.

Advocates of sustainability say the U.A.E. has a compelling reason to cut its carbon footprint – burning less oil means it has more to export, but that just shifts the burden elsewhere.

«The leadership very much senses oil is a finite resource and they have a commitment to selling resources, not burning them at home,» said Peter Sharratt, group global director for energy and sustainability at WSP, a London-based sustainable design and engineering company working as a consultant to Masdar.

«There is a real ambition to have a balanced approach.»

The words of the late founder of the U.A.E., Sheikh Zayed bin Sultan al-Nahayan, on the need to conserve the environment are not dissimilar to statements made by the West’s green lobby.

«On land and in the sea, our forefathers lived and survived in this environment,» he is quoted as saying by the organization that awards an environmental prize in his name (www.zayedprize.org.ae).

«They were able to do so only because they recognized the need to conserve it, to take from it only what they needed to live and to preserve it for succeeding generations.»

Starting from the clean slate of new construction, the U.A.E., in many ways, has a head start on sustainable growth over the West, with its hodge-podge of historic, inefficient buildings.

With a budget of $22 billion, Masdar was genuine progress, Mr. Sharratt said.

«They are one part of the world that understands the art of city-making. They can build to quality at speed,» he said.

For Mr. Sharratt, Dubai and Abu Dhabi, along with the other five less high-profile emirates, are a product of the international community, and its criticism is hypocritical.

«In one way, everybody has helped to shape Dubai,» he said. «Our own achievements in relation to sustainability don’t always quite match the rhetoric.»

That resonates with the long-standing complaint of oil-producing countries, as well as their defenders, that consumer nations have for generations burned huge amounts of fossil fuel and belatedly developed a conscience.

«When Europe set its target of 20 percent renewable energy, it was already around 10 percent at the time,» said Helene Pelosse, director general of the International Renewable Energy Agency, set up in 2009 and with headquarters in Abu Dhabi.

«The effort of the Gulf countries is a very good sign.»

In moving toward cleaner motor fuel, the U.A.E. is slightly behind the United States and very far off best practice in Europe, notably in Norway- heralded as the world’s most environmentally virtuous oil producer.

The International Fuel Quality Center ranks the world’s countries for the sulfur content of their vehicles and the U.A.E. comes in at number 46, two behind the United States at number 44.

Abu Dhabi has set a target to reduce the sulphur content of the fuel it uses to 10 parts per million. That would rank it with Europe. The timescale, however, is vague and depends on a refinery upgrade project being completed.

Meanwhile, Abu Dhabi is salving its conscience with a series of high-profile green events.

In November, it will host World Green Tourism Abu Dhabi, which describes itself as «the first dedicated eco-tourism event in the region.»

In January, the third World Future Energy Summit, billed as «the world’s foremost and must-attend annual meeting for the renewable energy and environment industry,» will follow.

The 2010 edition brought 24,792 attendees from 148 countries at the cost of many thousands of air miles.

Those arriving for this year’s event will be offered a scheme to offset emissions, although conference organizers said details had yet to be finalized.