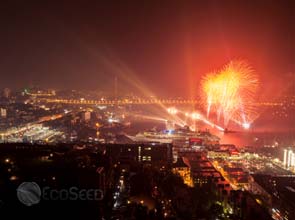 International trade arrangements haven’t given the environmental community too much cause for celebration recently, especially in relation to renewable energy.

Exchanges between the United States, the European Union and China have given particular cause for concern. For example, last year’s “Honolulu declaration” was marred by the news that the U.S. Department of Commerce would investigate claims that Chinese subsidies were leading to the “dumping” of solar panels in the U.S. market. This brought about the threat of a lose-lose situation where U.S. imports of raw material would face heavy levying in China, leading to an overall output of green tech falling.

Similarly, at the beginning of September it was announced that the E.U. would begin an investigation into complaints that Chinese solar panels were being sold at below-cost price within the bloc, with the threat of punitive tariffs being applied should it be found trade agreements have been violated.

Again, this in turn led to noises coming out of China indicating that a counter-investigation into E.U. exports of polysilicon, which is one of the key materials needed to manufacture the photovoltaic panels in question in the first place, may be launched in retaliation.

For those more concerned about the widespread implementation of clean energy sources than the economic dominance of any particular nation, the news that international trade rows may be holding the global solar industry back will always be unwelcome. However, a year on from Honolulu, there are now signs that situation is set to improve vastly.

Earlier this month representatives of the 21 nations of the Asia-Pacific Economic Cooperation group convened at Vladivostok on the pacific coast of Russia, where they agreed to cut import duties on green tech in a move that should help both liberalize trade and promote the advancement of renewable energy.

Under the agreement, 54 technologies will be subjected to duties of no more than 5 percent by 2015, and among this number are pieces of equipment employed in recycling plants, environmental monitoring, water treatment, and the generation of solar and wind power.

Between them, the APEC nations account for about 40 percent of the world’s population and 54 percent of global economic output and, while the European economic zone seems destined to be dragged further into stagnation, the Pacific Rim continues to show strong growth. Indeed, according to PricewaterhouseCoopers, within the next 10 years the volume of exports between APEC’s member nations will rise threefold to $14.6 trillion, while exports to the rest of the world will be worth $5.6 trillion, double their present value.

By cutting tariffs, it’s expected that green technologies will play an important role as trade between member economies continues on its meteoric rise. It is hoped that stimulating demand in this way will help to make a significant dent on the carbon footprint of the region.

This good news was added to when, just a few days after the conference, China, the biggest economy in APEC (and indeed the world) announced a monumental investment in subsidies for more environmentally friendly consumer goods.

Some 14 billion yuan (equivalent to $1.46 billion) are to be ploughed into raising demand for energy saving models of items such as personal computers, air conditioning units and transformers. According to ministry officials the program should save 31.3 billion kWh of electricity year on year, while driving up sales of energy saving products by 155.6 billion yuan, helping these less environmentally harmful alternatives to achieve a market share of over 40 percent. This should prove a major step in helping China to achieve its goal of reducing its energy intensity per unit of G.D.P. by 16 percent in the next three years.

These announcements are not just good news for those concerned about emissions from the APEC member economies. The agreement has been praised by the U.S. with deputy USTR Demetrios Marantis saying: “This is really a significant achievement in that it shows how APEC can lead […] It allows us to accomplish the twin goals of liberalizing trade and green growth.”

As far as the clean tech world is concerned, defusing the trade tensions of the past can only be a good thing going forward, allowing as it will, different parts of the industry to flourish in various parts of the world.

Steve Waller is an environmental blogger who covers a wide range of topics on his site, GreenSteve.com, from green politics to sustainable lifestyle choices.