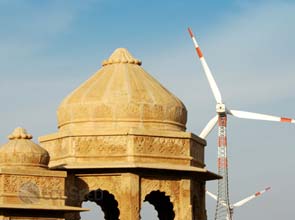 The Green Economy is not just a fancy catchphrase in the world of business. The United Nations Environment Programme defines it simply as one that improves human well-being and social equity, while significantly cutting environmental risks and ecological scarcities.

Transforming economies into “greener” ones doesn’t come cheap. So it is not surprising that the developed world, particularly the United States and the European Union, are the ones taking the lead in the move.

Developing countries, like China and India, are making their way to achieve green growth, but in a relatively slower pace.

But should they at all?

The Organization for Economic Cooperation and Development recognizes that the context of green growth in developing countries is different from that in developed economies.

Still, it believes that high rates of poverty mean that stepping up growth and development is highly crucial. Hence developing regions are just as in need of green growth as the developed world. But recognizing this means appreciating the idea that developing countries are key to making green growth a global success.

The O.E.C.D. thinks developing countries sit on areas extremely exposed to the adverse impacts of climate change, and have the tendency to be more dependent than advanced economies on the use of natural resources for economic purposes.

This puts them at risk of severe economic, social and ecological threats from energy, food and water insecurity. In addition, they are susceptible to premature deaths due to pollution, poor water quality and diseases linked to a changing climate.

“All of these factors undermine their development,” the Paris-based organization says.

And while most developing countries today only contribute minor shares to global greenhouse gas emissions – unlike the O.E.C.D. and major emerging countries – it is expected that their emissions will greatly increase if they continue to uphold conventional economic patterns and practices.

The O.E.C.D. said more and more developing countries are becoming sources of both global economic growth and carbon emissions, resulting into more intensive use of natural resources.

These two reasons are seen as spelling an urgent need to take concrete steps toward green growth.

How to do it

Key drivers to achieving both inclusive economic growth and environmental sustainability are national policy reforms and the development of an international policy and market infrastructure for this purpose.

As developing countries embrace green economy, they will need international support that will help accelerate development.

“An international enabling environment will help send the right policy and market signals,” the O.E.C.D. says.

It will create momentum for green growth by setting environmental regulations and standards; boost the demand and supply of environmental goods and services; and catalyze green growth efforts in different sectors including energy, transportation and agriculture.

In addition, it will also pave the way for international exchange of ideas about green growth issues. “Effective and comprehensive knowledge-sharing platforms are important for the international transfer of knowledge, good practices and technologies to developing countries,” said the group.

It will also be easier for developing countries to access investments through international cooperation and assistance, which is a major concern in this economic movement. Likewise, they should have easier access to clean technology and innovations.

One example of finance mechanisms that aid developing countries in achieving a green economy is the U.S.’ Overseas Private Investment Corporation, which mobilizes private capital to address critical development challenges.

Aside from helping native businesses to gain grip in emerging markets, it also encourages expansion in developing countries that have growth potential.

For instance, it looks after countries in the Middle East, North Africa, sub-Saharan Africa and Southeast Asia.

Multilateral banks such as the World Bank and the Asian Development Bank are also providing financial assistance for developing countries through grants and loans.

Take the case of India, which reportedly could be one of the dark horses in the race.

Global investment in renewable energy continues to grow in India and the country has seen the most remarkable growth, according to a Worldwatch Institute report.

The Asian country’s investment growth rose by 62 percent in 2011 – the sharpest among all countries.

In another report by Bloomberg Energy Finance, India was identified as the world leader in green power growth last year, with a total renewable energy investment of $10.3 billion and 52 percent growth in the industry.

Nothing less than solar power is at the core of the low-carbon efforts of India. Earlier this year, India crossed the 1-gigawatt solar photovoltaic milestone under the umbrella of its Jawaharlal Nehru National Solar Mission which aims to generate 20 gigawatts of solar energy by 2022 for India and make it the global leader in solar.

India has proved that green growth is achievable for developing countries, in the same way that it is for rich nations.

“Over the past two years, the green economy has gone from theory into practice… The inherent logic offers, perhaps for the first time, a sustainable growth paradigm that is as much a developing country agenda as it is a developed economy one,” said Achim Steiner, executive director of the United Nations Environment Program.

In the next four decades, increasingly developing countries will realize green growth for their own, according to O.E.C.D projections. “Their taking a greener growth path is therefore essential for global green growth and environmental sustainability.”