Amidst Typhoon Haiyan: The science behind Yeb Sano’s speech 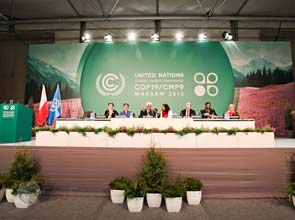 Lead negotiator of the Philippines, Yeb Sano, delivered an emotional speech at the start of the nineteenth session of the Conference of Parties in Warsaw, Poland, but his appeal for climate action is backed up with science and newly gathered data.

Mr. Sano’s speech was met with a standing ovation by other representatives at the conference (see related story).

But despite the outflow of emotion from the lead negotiator of the Philippines, his speech is backed up with evidence coming from recently published studies.

“The science has given us a picture that has become much more in focus. The I.P.C.C. report on climate change and extreme events underscored the risks associated with changes in the patterns as well as frequency of extreme weather events,” said Mr. Sano in his speech, citing the recent assessment report of the Intergovernmental Panel on Climate Change.

“Science tells us that simply, climate change will mean more intense tropical storms,” he warned. “As the Earth warms up, that would include the oceans. The energy that is stored in the waters of the Philippines will increase and intensity of typhoons and the trend we now see is that more destructive storms will be the new norm.”

Back when the assessment report of the I.P.C.C. was released, World Meteorological Organization Secretary-General Michel Jarraud confirmed the fact that climate change does have something to do with the extreme weather patterns that the world is seeing.

“Multiple lines of evidence confirm that the extra heat being trapped by greenhouse gases is warming the Earth’s surface to record levels, heating the oceans, raising sea levels, melting ice caps and glaciers, and changing weather patterns and extremes,” the W.M.O. secretary-general said.

And true enough, looking at the country of the Philippines, “changing weather patterns and extremes” have become the new norm.

What once simply brought annual rains to the island country, the southwest monsoon – known in the Philippines as habagat, is now bringing torrential rains which trigger massive floods, particularly in the capital city of the country, Manila.

Looking at the past, Typhoon Haiyan was not the only typhoon that has left the country in a dire situation. Back in September 2009, Typhoon Ketsana, which was locally called Ondoy, caused massive floods in the largest island in the Philippines – Luzon. Ketsana affected around 90,000 families and 450,000 persons, leaving around a hundred dead.

Another, Typhoon Bopha back in December 2012, which was locally named Pablo, also devastated the Philippines affecting over 6 million persons, 700,000 families, and leaving a thousand dead and at least 2,000 injured.

“We can stop this madness. Right here in Warsaw. Typhoons such as Haiyan and its impacts represent a sobering reminder to the international community that we cannot afford to procrastinate on climate action,” Mr. Sano stressed during his speech, calling for immediate action now. – L.Polintan