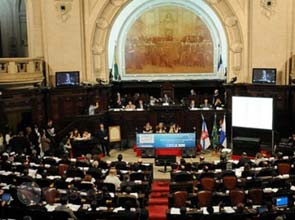 In a study was co-authored by the United Nations, Global Legislators Organization, or GLOBE, and the Grantham Research Institute at the London School of Economics, found that 66 countries have legislation concerning climate change.

The new study covers countries that are responsible for 88 percent of the global carbon emissions. Of the 66 countries, 64 of them “have progressed or are progressing” on climate change, according to the U.N. Framework Convention on Climate Change.

“It is no exaggeration to say that the clean revolution we need is being carried forward by legislation. Domestic legislation is critical because it is the linchpin between action on the ground and the international agreement,” said Christiana Figueres, executive secretary of the U.N.F.C.C.C.

Noting that debates about climate change are healthy for any society in any country, Ms. Figueres stressed that climate change is one of the most complex challenges that affects every human directly or indirectly.

“Hence solutions to climate change should reflect an in-depth, careful consideration of the vast array of factors and implications. This debate is constructive and advisable. However, it is neither constructive nor advisable to let climate change devolve into a politicized altercation,” Ms. Figueres said at the Second GLOBE Climate Legislation Summit in Washington, D.C.

However, among the 66 countries covered in the study, two began processes of reverse legislation. Australia’s new government proposed to repeal aspects of the Clean Energy Act, while Japan announced that it is lowering its ambition on climate change in response to its reduced reliance on nuclear energy following the Fukushima accident.

Despite these two countries that are in the process of reverse legislation, Ms. Figueres did point out that there are some achievements against climate change.

She cited Massachusetts’s 2008 Green Jobs Act which has spawned more than 5,500 clean energy firms in the state, as well as 80,000 clean energy sector jobs. The U.S. as a whole has also achieved a momentous landmark – increasing its renewable energy generated to 13 percent in 2013 compared to the 8 percent of 2007’s. – EcoSeed Staff