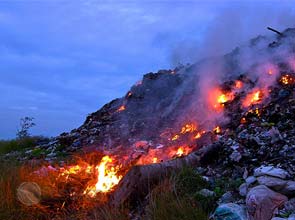 According to a study by the National Center for Atmospheric Research, unregulated trash burning across the globe is resulting in harmful greenhouse gases being released into the atmosphere.

Around 40 percent of the world’s garbage is still being disposed of by burning, affecting both human health and climate change.

According to a study by the National Center for Atmospheric Research, unregulated trash burning across the globe is resulting in harmful greenhouse gases being released into the atmosphere.

“Air pollution across the globe is significantly underestimated because no one is tracking open-fire burning of trash,” said N.C.A.R. scientist Christine Wiedinmyer.

Trash burning is often most prevalent in developing countries where there are fewer trash disposal facilities, such as landfills or commercial incinerators.

Unlike emissions from commercial incinerators, emissions from burning trash often go unreported and are left out of many national inventories of air pollution. They are often not incorporated into policy making.

“The uncontrolled burning of trash is a major source of pollutants, and it’s one that should receive more attention,” said Ms. Wiedinmyer.

The study provides rough estimates, on a country-by-country basis, of pollutants such as particulates, carbon dioxide, carbon monoxide, and mercury that are emitted by burning garbage.

To estimate the pollutant emissions from trash fires, the researchers compared population figures and per capita waste production with official tallies of trash disposal for each country in the world. The estimate is that 1.1 billion tons or 41 percent of total waste generated worldwide is burned annually.

Heavy populated countries with various levels of industrial development were found to produce the most waste. These were China, the United States, India, Japan, Brazil, and Germany. However, it was the populous developing countries that had the greatest emissions from trash burning. These included China, India, Brazil, Mexico, Pakistan, and Turkey.

The study found that trash burning produces about 29 percent of officially reported human-related global emissions of small particulates, 10 percent of mercury and 64 percent of polycyclic aromatic hydrocarbons. These three pollutants have been linked to health problems such as decreased lung function, neurological disorders, cancer and heart attacks.

Burning trash was also found to have produced an amount of carbon dioxide equal to an estimated 5 percent of reported human-related emissions. In some developing countries, such as Lesotho, Burundi, Mali, Somalia, and Sri Lanka, trash burning produces more carbon dioxide than is tallied in official inventories. This discrepancy can be important in international negotiations over reducing greenhouse gas emissions.

“This study was a first step to put some bounds on the magnitude of this issue,” said Ms. Wiedinmyer. “The next step is to look at what happens when these pollutants are emitted into the atmosphere—where are they being transported and which populations are being most affected.” – EcoSeed Staff